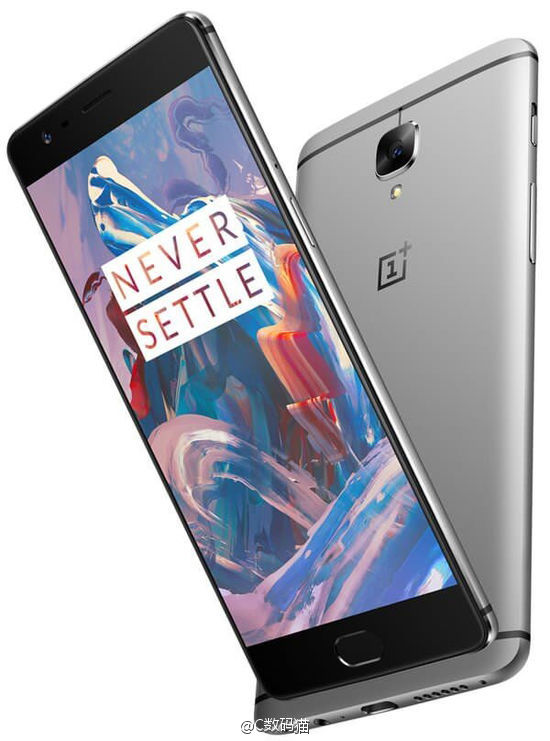 OnePlus 3 is the next new flagship from OnePlus that is expected to be launched in the next few months. The device has been a part of several leaks and rumors in the past where it was found leaked in a video and render, AnTuTu, e-retailer listing and GFXBench listing. A new HD render of the device has just got leaked on weibo showing us the full design of the device.

The leaked image of the device shows the rear and front panel. The rear panel comes with the rear camera and the LED flash below the camera lens. The OnePlus logo is located below the LED Flash. The front panel comes with the front facing camera on top and then the large display of unknown size. A home button is also available below the display which may also have the fingerprint scanner.

The OnePlus 3 is listed on GFXBench with 4GB and 6GB RAM options whereas, it is listed at GeekBench with 6GB RAM. On GeekBench, the device is listed with Android 6.0.1 marshmallow OS out of the box and is powered by the quad-core 1.59 GHz Qualcomm Snapdragon 820 msm8996 processor and will have 6GB of RAM. It scored 2266 points in single-core test and 5012 points in the multi-core test.

On GFXBench, the OnePlus 3 is listed with two RAM variants with one having 4GB of RAM and the other with 6GB of RAM. The listing further confirms that the OnePlus 3 will have a 5-inch full HD display with 1920 x 1080 pixel resolution. It will be powered by the quad core 2.1GHz Qualcomm Snapdragon 820 ([email protected] + [email protected] – ARMv8) processor along with Qualcomm Adreno 530 GPU.

It runs on the Android 6.0.1 Marshmallow OS out of the box. It comes with 64 GB inbuilt storage and features a 16-megapixel rear LED flash camera along with an 8-megapixel front facing camera. Other features includes WiFi, Bluetooth, GPS, NFC and other standard connectivity options.