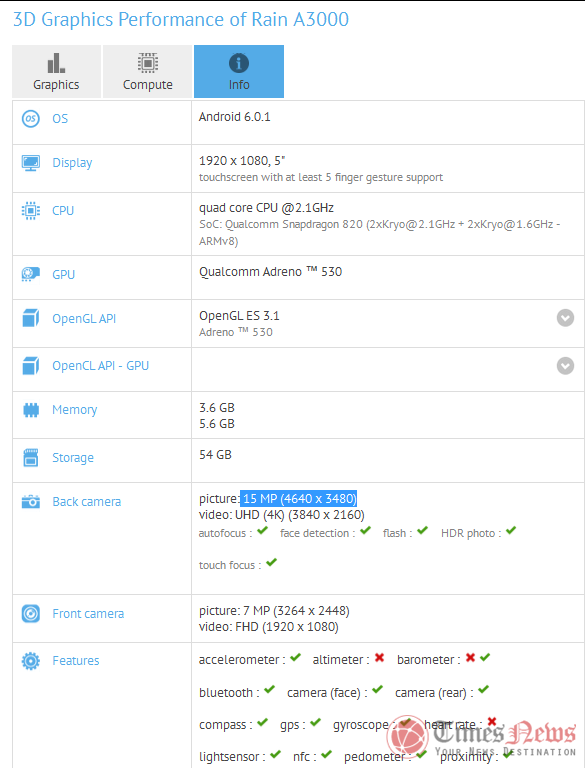 OnePlus’s upcoming smartphone in the flagship category is in the rumors from a long time and the device is now spotted on bench-marking websites with 6GB and 4GB of RAM variants. The device is listed on GFXBench with 4GB and 6GB RAM options whereas, it is listed at GeekBench with 6GB RAM. There is no information available currently when the company will unveil the OnePlus 3. OnePlus 3 will be the successor to the Oneplus 2 smartphone that was launched last year.

The OnePlus 3 is listed on both GeekBench and GFXBench with the name Rain A3000 from which we can expect that the One A3000 will be the model number of the new flagship device. On GeekBench, the device is listed with Android 6.0.1 marshmallow OS out of the box and is powered by the quad-core 1.59 GHz Qualcomm Snapdragon 820 msm8996 processor and will have 6GB of RAM. It scored 2266 points in single-core test and 5012 points in the multi-core test.

On GFXBench, the OnePlus 3 is listed with two RAM variants with one having 4GB of RAM and the other with 6GB of RAM. The listing further confirms that the OnePlus 3 will have a 5-inch full HD display with 1920 x 1080 pixel resolution. It will be powered by the quad core 2.1GHz Qualcomm Snapdragon 820 ([email protected] + [email protected] – ARMv8) processor along with Qualcomm Adreno 530 GPU. It runs on the Android 6.0.1 Marshmallow OS out of the box.

Further, it comes with 64 GB inbuilt storage and features a 16-megapixel rear LED flash camera along with an 8-megapixel front facing camera. Other features includes WiFi, Bluetooth, GPS, NFC and other standard connectivity options as well. No other information has been listed in the GFXBench database. So, we have to wait for its TENAA listing for more details on its specs and images.

OnePlus 3 was also found listed on a third party retailer OppoMart with specs, price and images. The device was also spotted at AnTuTu benchmark listing its key specs. You may also want to take a look at the leaked promo video and image of the device as well. Stay tuned for more news and updates.