OnePlus 3 spotted at AnTuTu with Snapdragon 820 and 4GB of RAM, could be launched on April 7 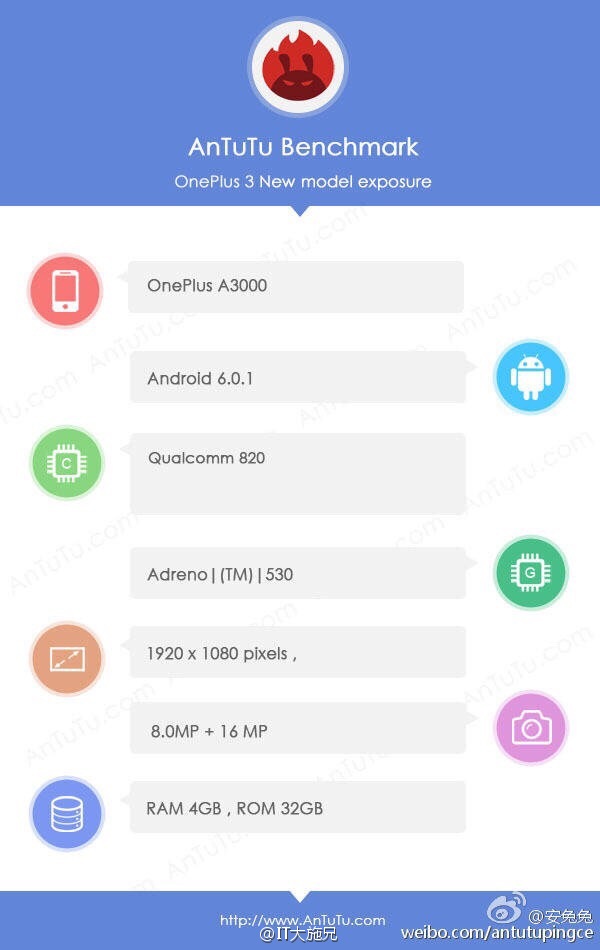 OnePlus launched a handful of new devices that were mostly liked by the customers and is now gearing up for the launch of the new flagship device OnePlus 3 which is expected to be launch on the April 7 event of the company. The unannounced flagship OnePlus 3, that was leaked previously, has just been spotted on the AnTuTu database with top-end specifications that were used by other big companies like LG and Samsung on their flagship devices that were launched this year. The AnTuTu listing gives the details of most of its specs.

The AnTuTu listing shows that the next OnePlus flagship OnePlus 3 will be launched with a 1920×1080 pixel resolution display expected to be 5.5-inch of size. The device comes with model number OnePlus A3000 which is powered by the latest Qualcomm chipset Snapdragon 820 having the Adreno 530 with 4GB of RAM and 32GB of inbuilt storage capacity. No word on the expandable storage capacity in the AnTuTu listing as of now. It runs on the latest Android 6.0.1 Marshmallow out of the box.

It features a 16-megapixel rear camera with an 8-megapixel front facing camera. No other details of the device have been listed in the AnTuTu listing. So we have to wait for its TENAA listing for more details and remember that the above details have not been official yet, so take it with a pinch of salt. Everything about the device will be cleared in the company’s April 7 event that is going to take place in the city of Beijing in China. Let’s wait and see what surprises the company will give to its customers.

OnePlus may also launch the Mini variant of the OnePlus 2 called as OnePlus 2 Mini or OnePlus Mini that was certified by TENAA in December last year. It was having the model number One E1000 and was listed with features like a 4.99-inch OLED display with 1080×1920 pixel resolution, a 2.0GHz quad-core processor (Qualcomm Snapdragon 810 SoC), 3 GB of RAM, 16 GB of inbuilt storage capacity with up to 128GB expandable storage slot, a 13-megapixel rear camera with LED flash, an 8-megapixel front facing camera, Android 5.1.1 Lollipop OS, measures 140 × 69 × 6.9mm, 138gms weight, 4G LTE, 3G, 2G, Bluetooth, GPS, WiFi etc connectivity options and Black color option. It was also spotted on GFXBench listing with 4GB RAM, 5-megapixel front camera and 4.6-inch display.