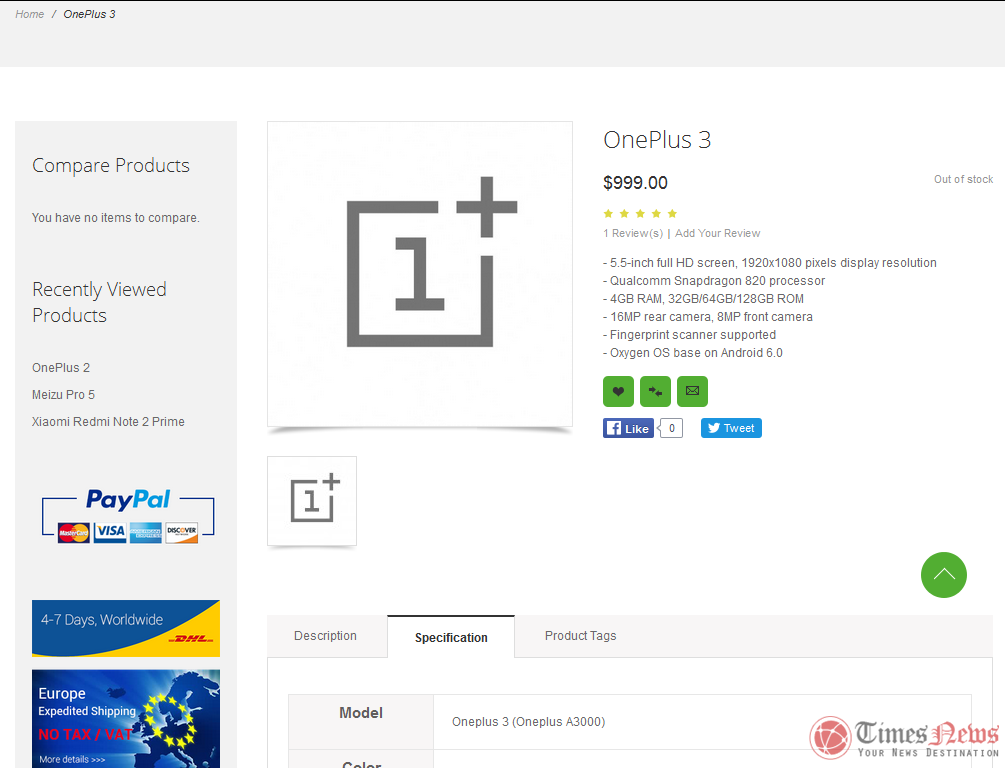 OnePlus’s upcoming flagship device OnePlus 3 have been leaked a number of times online in a video and on AnTuTu listing most of its specifications. OnePlus 3 was previously rumored to launch on April 7 event of the company but that was proved to be a rumor only as the company haven’t announced anything on April 7. The device is now listed on a third party online retailer OppoMart with full specs and price of the device, but no images of the device are listed, however. OppoMart lists the OnePlus 3 with $999 price tag and model number Oneplus A3000. It is listed with Black and White color options on the e-retailer.

OppoMart has listed the OnePlus 3 with specs like a 5.5-inch full HD display 1920×1080 pixels resolution and is powered by the 2.0GHz quad-core Qualcomm Snapdragon 820 processor along with Adreno 530 GPU and 4GB of LPDDR4 RAM. The display of this device also comes with CABC and DRAM (Display RAM) technology that adjust the level of backlight and differentiate between dynamic and static content on the screen.

It comes with 32GB/64GB/128GB inbuilt storage variants and runs on the Oxygen OS based on Android 6.0 marshmallow out of the box. Further, the listing confirms that the OnePlus 3 device will have a 16-megapixel Sony IMX298 rear camera with LED flash and an 8-megapixel front facing camera as well. It supports Dual-SIM and is backed up by an embedded rechargeable 3650 mAh LiPo battery. It supports 4G LTE, 3G and other standard connectivity options.

The OnePlus 3 was spotted on AnTuTu with a 1920×1080 pixel resolution display expected to be 5.5-inch of size. The device comes with model number OnePlus A3000 which is powered by the latest Qualcomm chipset Snapdragon 820 having the Adreno 530 with 4GB of RAM and 32GB of inbuilt storage capacity. No word on the expandable storage capacity in the AnTuTu listing as of now. It runs on the latest Android 6.0.1 Marshmallow out of the box. It features a 16-megapixel rear camera with an 8-megapixel front facing camera. No other details of the device have been listed in the AnTuTu listing.