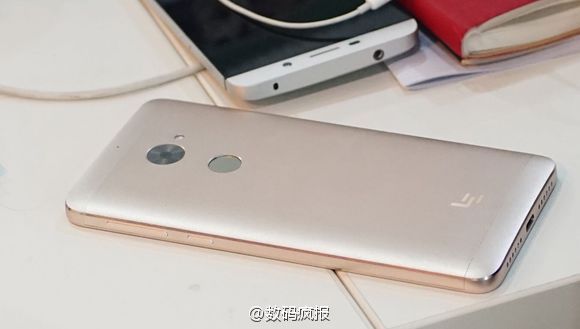 LETV or LeEco is going to launch its new LeEco (LETV) Le Max 2 smartphone soon as per the rumors online and it will have top-end specifications. The LeEco (LETV) Le Max 2 was previously spotted on AnTuTu with key specs of the device and was also spotted listed on Indian import/export website Zauba. Some new rear and front panel images of the device has just been leaked online that gives us the clear idea of its design. We are not able to confirm the genuineness of these leaked images but these looks like the actual images of this device.

The leaked images of the device confirms the rear camera with LED flash and a fingerprint scanner below the camera. The dual speakers are available on the bottom and the device comes with sided buttons for volume and power. The front end comes with a speaker surrounded by a front camera and a sensor. The new leak also suggests that this device will have Snapdragon 652, MediaTek Helio X20 and Snapdragon 820 processor variants.

The Letv Le Max 2  with model number X821 was spotted with a 2560 x 1440 pixel resolution, however the screen size is not listed in the benchmark of the device. It is powered by the Qualcomm Snapdragon 820 processor with Adreno 530 GPU. The device has 4Gb of RAM and 32GB of inbuilt storage capacity. It runs on the Android 6.0.1 Marshmallow OS out of the box. It features a 21-megapixel rear camera and a 1n 8-megapixel front facing camera as well. no other details are listed in the benchmark, however.

The device is spotted on the India import/export database website Zauba that has confirmed that the LeTv Max 2 will be priced around INR 22,664 (around $340) in India at the time of the launch. The above details are not confirmed by the company yet and the official event f the company is not yet scheduled. So we have to wait for more leaks of the device to have more information.