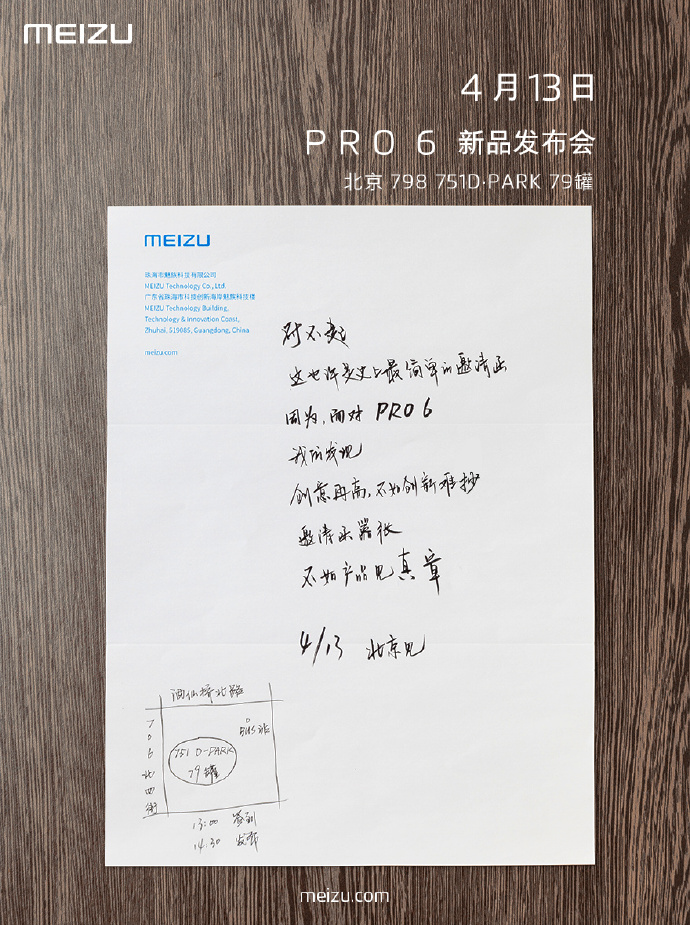 In an event, couple of days ago, Meizu launched the Meizu m3 Note smartphone that is the successor to the last year’s Meizu m2 Note but the company haven’t launched the flagship device Meizu Pro 6. The company has now started sending the invites and has announced its April 13 event in Beijing 798 751D · PARK 79 where they will announce the flagship Pro 6. The new teaser on the weibo account of Meizu comes with the “PRO 6” text confirming the launch of the flagship device in the event.

The PRO 6 will have ARM Mali-T880 GPU and will offer 32GB and 64GB of internal storage options. It will feature a 20-megapixel rear camera with LED flash amd a 5-megapixel front facing camera. Pro 6 runs on the Android 6.0 marshmallow OS out of the box. The Meizu Pro 6 in the AnTuTu benchmark was spotted with similar features like in the GFXbench database.

The previous rumors for the Meizu Pro 6 includes the Samsung Exynos 7420 octa-core processor (quad-core 2.1GHz Cortex-A57 + quad-core 1.5GHz Cortex-A53) that comes with Mali T760 MP8 GPU. It will have a full-HD display having the 1080×1920 pixels resolution and is expected to have Hi-Fi 3.0 and fast charging technology features. The Pro 6 will run on the Android 6 Marshmallow based Flyme OS 6.0 out-of-the-box. It is also rumored to have two variants: one with 6GB of RAM + 128GB storage and the second will have 4GB of RAM + 64GB of inbuilt storage.

Stay tuned for more updates from the Meizu’s official event on April 13.