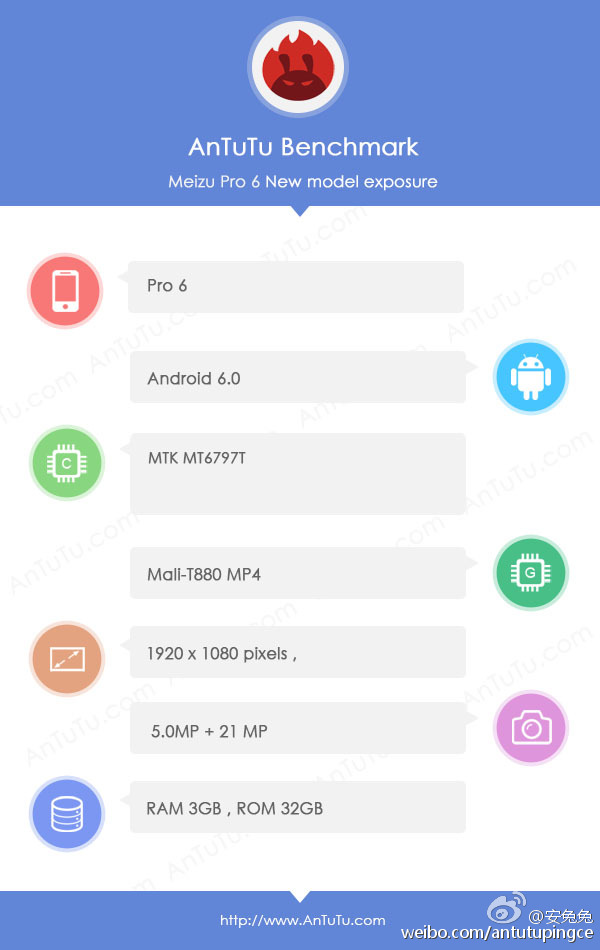 Meizu upcoming flagship device Meizu Pro 6 is coming with some exclusive hardware features. According to number of leaks it was revealed that the Pro 6 will run the Deca core CPU and will have 3GB of RAM. The same has been confirmed by the device’s listing on different Benchmark databases. The Meizu Pro 6 have been spotted on the GFXBench and AnTuTu databases, respectively, confirming most of the device specs and features.

The Pro 6 will have ARM Mali-T880 GPU and will offer 32GB and 64GB of internal storage options. It will feature a 20-megapixel rear camera with a 5-megapixel front facing camera. It will run on the Android 6.0 marshmallow OS out of the box according to the GFXbench listing. On the other side, the Meizu Pro 6, according to the AnTuTu benchmark, will have similar features spotted at the GFXbench database with no changes what so ever.

Recently, MediaTek confirms the existance of the Deca-core Helio X25 processor that will be used exclusively by the Meizu Pro 6 flagship. Meizu Pro 6 was previously rumored to have the Samsung Exynos 7420 octa-core processor (quad-core 2.1GHz Cortex-A57 + quad-core 1.5GHz Cortex-A53) that comes with Mali T760 MP8 GPU too. It was rumored to have a full-HD display having the 1080×1920 pixels resolution. The device was also expected to have Hi-Fi 3.0 and fast charging technology features. The Pro 6 will run on the Android 6 Marshmallow based Flyme OS 6.0 out-of-the-box. It is also rumored to have two variants: one with 6GB of RAM + 128GB storage and the second will have 4GB of RAM + 64GB of inbuilt storage.