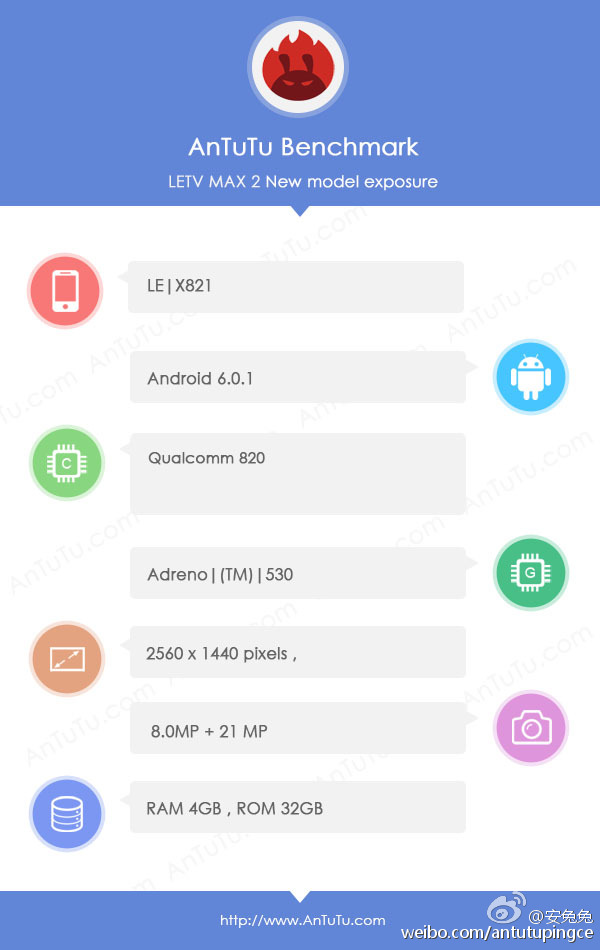 LeTV is going to launch the next flagship device Letv Le Max 2 soon and is rumored to come with top-end specs that includes the newly launched Snapdragon 820 Soc. Also known as LeTV Le Max 2, the device has just been spotted on the AnTuTu benchmark database running the latest Snapdragon chipset with Marshmallow OS and 4GB of RAM inside. The device comes with model number X821 and the benchmark has revealed most of the key specs of the upcoming flagship of LeEco or LeTV.

The AnTuTu listing reveals that the LeTV Le Max 2 or LeTV Max 2 comes with a 2560 x 1440 pixel resolution, however the screen size is not listed in the benchmark of the device. It is powered by the Qualcomm Snapdragon 820 processor with Adreno 530 GPU. The device has 4Gb of RAM and 32GB of inbuilt storage capacity. It runs on the Android 6.0.1 Marshmallow OS out of the box. It features a 21-megapixel rear camera and a 1n 8-megapixel front facing camera as well. no other details are listed in the benchmark, however.