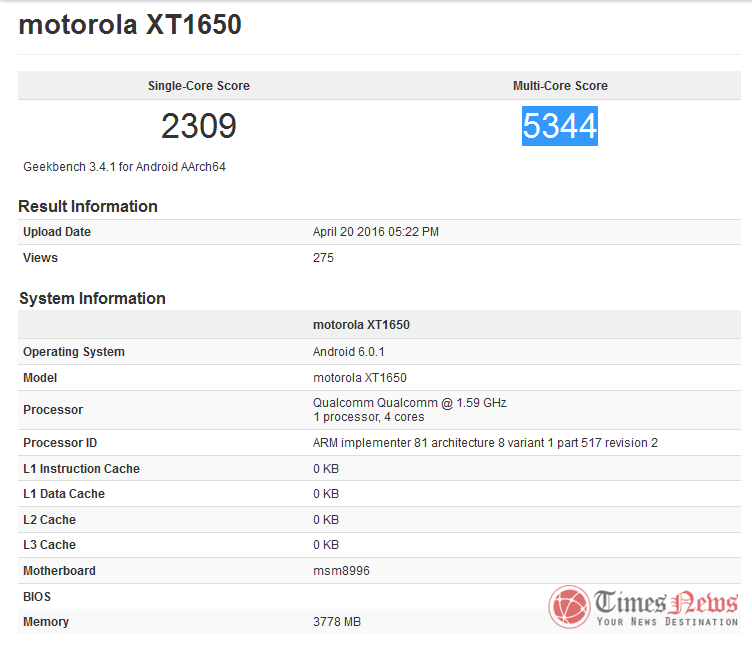 Motorola is now confirmed working the new Motorola Moto X 2016 edition with high-end specifications as the device is just spotted at GeekBench browser. It is listed on the GeekBench with name Motorola XT1650 and lists some of the specs of the device. Judging from these specs, it is confirmed that XT1650 will be the model number of the flagship Motorola device that will be the successor to the Moto X Style or Moto X Pure Edition launched in 2015.

The GeekBench lists the Motorola XT1650 with a 1.59 GHz quad-core Qualcomm Snapdragon 820 processor along with 4GB of RAM. It runs on the Android 6.0.1 Marshmallow OS out of the box. No other details have been available in the GeekBench database listing, so we have to wait for the TENAA or GFXBench listing for more details on this device. It scored 2309 points in the single core test and 5344 points in the multi-core test.

The Moto X 2016 is expected to feature a fingerprint scanner on the home button as an alleged image from the device was leaked in the past. A Motorola executive has also confirmed that all the Motorola device launching in the year 2016 will have fingerprint scanner.

The Motorola Moto X3 was also spotted imported to India when the device was listed in the Indian import/export website’s database called Zauba. It was listed with a 5-inch display and price INR 6,812 which is around $103 according to current exchange rates. The Lenovo XT1700 and Lenovo XT1706 were also spotted at GFXBench listings that confirmed that both comes with a 5-inch HD display with 1280 x 720 pixel resolution and will be powered by a quad core 988MHz MediaTek MT6735P (Cortex A53 – ARMv8) processor with ARM Mali-T720 GPU and 2GB of RAM with 16GB of inbuilt storage.

It runs on the Android 6.0 Marshmallow OS out of the box.  Both the new Moto variants features a 8-megapixel rear camera and a 5-megapixel front facing camera with the devices supporting single sim option. Connectivity options includes WiFi, NFC, Bluetooth and USB.