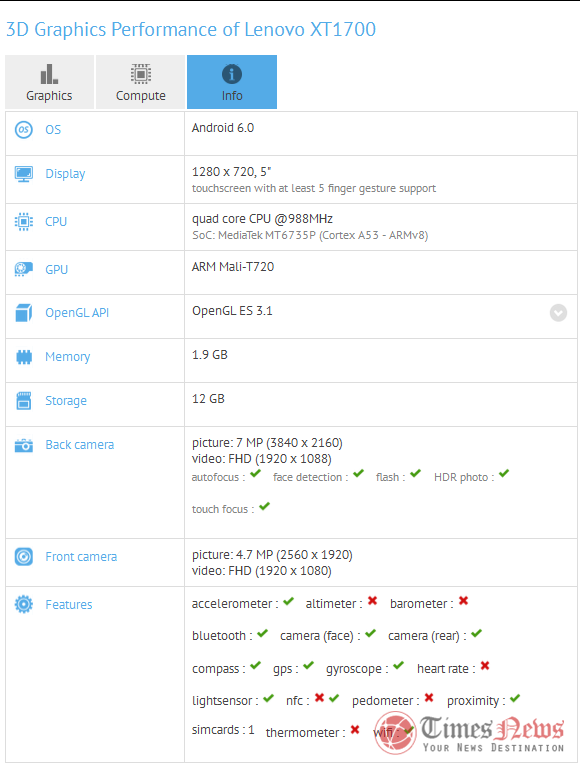 Two new Motorola Moto devices has just made its appearance at the GFXBench listing with names Lenovo XT1700 and Lenovo XT1706 and both comes with same specifications. The listing were spotted by Motorola Moto and rumors are saying that both these new models will be the variants of the Motorola Moto E (3rd gen) smartphone that is still not announced by the company. So we have to wait for the official confirmation of these model numbers. Both the variants comes with good specs like a 5-inch display, Mediatek processor and 8-megapixel rear camera. let’s checkout the specs of this unannounced Moto device.

Lenovo XT1700 and Lenovo XT1706 GFXBench listings confirms that both comes with a 5-inch HD display with 1280 x 720 pixel resolution and will be powered by a quad core 988MHz MediaTek MT6735P (Cortex A53 – ARMv8) processor with ARM Mali-T720 GPU and 2GB of RAM with 16GB of inbuilt storage. It runs on the Android 6.0 Marshmallow OS out of the box.

The Moto E 3rd Gen was launched with features like a 4.5-inch qHD display with Corning Gorilla glass 3 protection and 960 x 540 pixels resolution and is powered by the 1.2 GHz quad-core Snapdragon 410 processor with 400 MHz Adreno 306 GPU with 1GB of RAM. It has 8GB internal storage with expandable storage via microSD card. It was lanched with pre-installed Android 5.0 Lollipop OS out of the box.