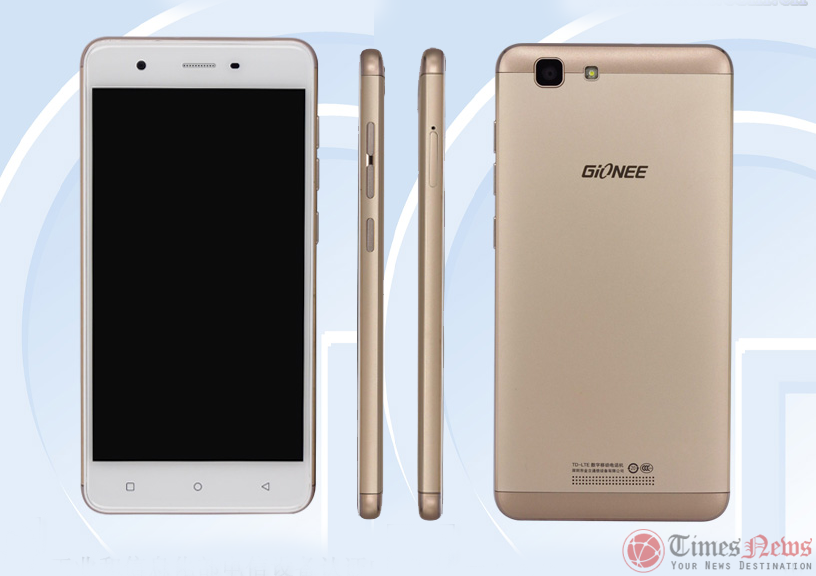 A number of devices from Gionee has already got the TENAA certification in past couple of months like Gionee V580 feature phone, Gionee GN9010L and Gionee GN5001S, Gionee GN5002 and finally, the GIONEE GN5001 and GIONEE GN9010. Now, a new Gionee device has got the TENAA approval in China that comes with mid-range specs. The device is listed with the name Gionee F105 in TENAA database revealing the images and specs of the device.

The Gionee F105 comes with a 5-inch IPS HD display having 1280 × 720 pixel resolution. It is powered by a 1.3GHz quad-core processor and comes with 2 GB of RAM inside. It has 16 GB inbuilt storage capacity and up to 128GB expandable storage micro SD slot. It runs on the Android 5.1 Lollipop OS out of the box and features a 8-megapixel rear and a 5-megapixel front facing camera.

Last week, Gionee launched the successor to the Gionee M5 called the Gionee M5 Plus that is priced at 2499 Yuan ( Around $385) and currently available for sale in China. The phone features a large 6-inch AMOLED display with 1080×1920 pixel resolution with a 1.3GHz Octa-Core MediaTek MT6753 64-bit processor along with Mali-T720 GPU and 3GB of RAM. It supports 64GB Internal storage with expandable memory up to 128GB via micro SD.

M5 Plus runs on Android 5.1 Lollipop with Amigo OS 3.1 UI on top and features a 13-megapixel Auto Focus rear camera with LED flash, PDAF and 1080p video recording. A 5-megapixel front-facing camera is also available. M5 Plus supports a fingerprint sensor that is placed on the rear panel of the phone and it also support Dual SIM. It measures 160.9 x 81.2 x 8.4mm and weights 208g. A 5020mAh battery with fast charging feature is also available.

So, Gionee is having a bunch of device approvals from TENAA and they have already launched the Gionee GN8001, approved by TENAA in November, as the Gionee M5 Plus we discussed above. Stay tuned for more updates.