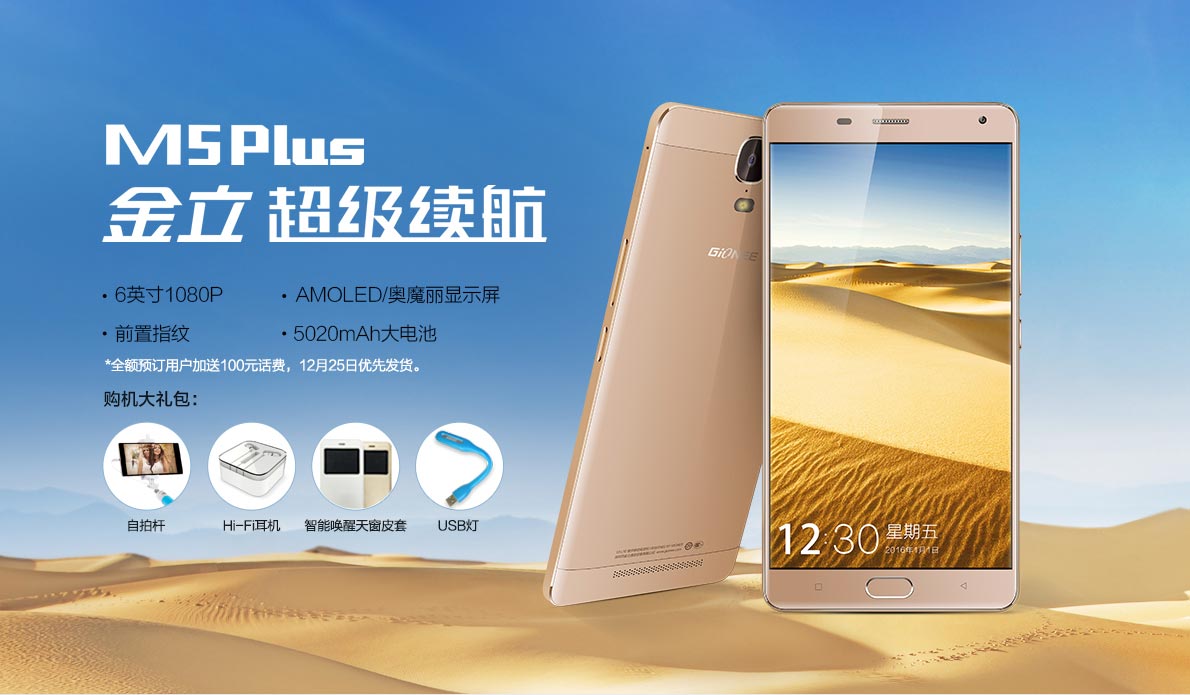 As we told you few days back that Gionee is teasing the Gionee M5 Plus smartphone on their weibo account for the December 21 launch, and now the Chinese OEM has launched the phone with impressive top-end features we reported previously. The M5 Plus will be available in Gold and Silver color variants 2499 Yuan ( Around $385) in China starting December 25th on the Gionee store online.

The Gionee M5 Plus comes with a 6-inch AMOLED display with 1080×1920 pixel resolution and is powered by a 1.3GHz Octa-Core MediaTek MT6753 64-bit processor with Mali-T720 GPU and 3GB of RAM. It also has 64GB Internal storage capacity with expandable memory up to 128GB via micro SD. It runs on Android 5.1 Lollipop with Amigo OS 3.1 UI on top.

It features a 13-megapixel Auto Focus rear camera with LED flash, PDAF and 1080p video recording. A 5-megapixel front-facing camera is also available. A Fingerprint sensor is placed on the rear panel of the phone and it also support Dual SIM. It measures 160.9 x 81.2 x 8.4mm and weights 208g. A 5020mAh battery with fast charging feature is also available.

“M5 Plus is the new generation business from Gionee. Only large display makes a premium phone.” said William Lu, CEO of Gionee. The M5 Plus comes with connectivity options like 4G LTE, 3G, Wi-Fi, Bluetooth 4.0, GPS, USB OTG, USB Type-C etc. The M5 plus will be available in China currently and will be launched as Gionee Marathon M5 Plus outside China. The pricing and availability details for the global variant will be announced at the time of the launch.

Any takers of the M5 Plus? Do share with us via comments. Stay tuned.