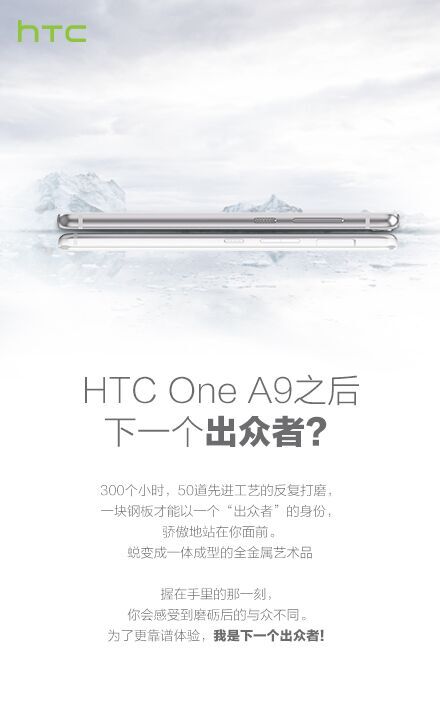 HTC has started teasing the long rumored HTC One X9 on its weibo account where they have posted a number of teasers for the HTC One X9. The teaser are titled as,”After the A9, an outstanding person who will be the next?” The teaser image confirms thatHTC One X9 will be launched with features like OIS and RAW format support. The teaser also confirms that the next device will have a 13MP rear camera and will have Full Metal body.

HTC One X9 has already got the TENAA approval in China last month confirming the specifications and images of the device. The TENAA listing confirms that HTC One X9 will have a 5.5-inches IPS display with 1920 × 1080 pixel resolution and is powered by a 2.2 GHz octa-core processor which is expected to be the Qualcomm Snapdragon 820 chipset. It has 2 GB of RAM and 16 GB of inbuilt storage with up to 1TB expandable storage slot. It runs on android 5.0.2 OS out of the box.

It features a 13-megapixel rear camera with a 5-megapixel front facing camera. It was listed on TENAA in the silver gray color and comes with connectivity options such as Bluetooth, USB, GPS, GSM, TD-SCDMA, TD-LTE, 4G LTE FDD, WCDMA etc with a 3000mAh battery. It weights 174 g and measures 153.2×75.9×7.99 mm.