OnePlus X Listed For $249 On OppoMart With Full specifications 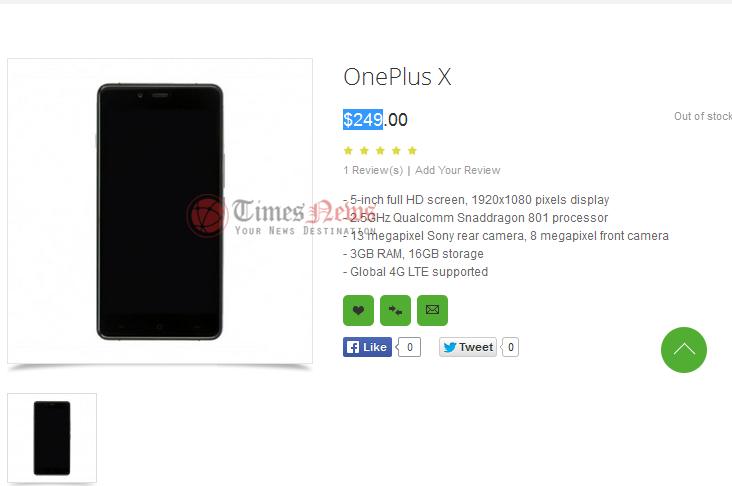 OnePlus is already teasing its new smartphone OnePlus X via their social media accounts. But we have now found OnePlus X listed on an e-retailer called OppoMart with full specifications and price of this new phone. The OnePlus X is listed for $249 unlocked on Oppomart with Global 4G LTE connectivity support. The listing of OnePlus X includes an image of the phone which was available on its TENAA listing where it was listed with name One E1001.

It is listed as model Oneplus X (Oneplus mini), confirming the two names for the phone and looks weaker than the OnePlus 2 if we compare the specifications. The specifications of OnePlus X includes a 5-inch full HD IPS 2.5D display with 1920×1080 pixel resolution and is powered by a 2.5 GHz Qualcomm Snapdragon 801 quad-core processor and 3GB of RAM. It runs on Oxygen OS based on Android 5.1 OS out of the box.

It has 16GB/64GB storage variants and features a 13-megapixel rear camera and an 8-megapixel front camera and comes with 2K video recording. It comes with a 2450 mAh lithium-ion battery that can give up to 10 days of standby time. It comes with connectivity options such as 4G LTE, Wi-Fi 802.11b/g/n network, Bluetooth, Built-in GPS and Micro SIM capability.

OnePlus X was also found listed on Amazon India with name OnePlus Mini with full specifications, but the listing was removed by the e-retailer after got caught by media. So, OnePlus X aka OnePlus Mini will release in the company’s October 29 event. See you there in the launch event.