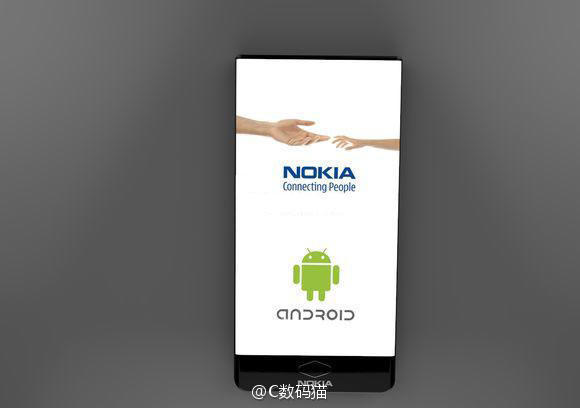 Nokia, owned by HMD Global group, is going to make a comeback in the smartphone industry in the year 2017 as we saw in the previous reports where the Finland based company confirmed the launch of Android powered smartphones next year. Some alleged Nokia devices were also spotted recently on Geekbench benchmark listing including the Nokia Pixel running the Android 7.0.1 OS out of the box. The company is also rumored to launch top-end smartphones powered by SD821 and some entry-level to mid-range devices powered by SD430 as we saw in previous posts.

Now, the company’s upcoming Android powered high-end specifications phone has just been spotted in a leaked image shared by a user on weibo that comes with an impressive display and a fingerprint scanner as well. The leaked image shared by the weibo user shows a device that comes with a dual curved edge all-screen display with no front camera available. There is a fingerprint scanner available below the display on the physical home button that comes with a different unique shape followed by the ‘Nokia’ logo below that.

We won’t see any front camera on the top of the device in the leaked image but here, we want to share the name of Xiaomi’s phone Mi Mix that have a similar all-screen display and features a 5-megapixel front camera available below the screen and is 50% smaller than a standard camera sensor. This new leaked Nokia phone may also get a similar front camera available below the screen. The leaked device display also shows the famous “Nokia Connecting People” startup message we have seen in old Nokia branded featured phones already. The android logo is below the startup message on the display.

Not much rumors are available about this device’s specifications as we don’t know the name and model number of this upcoming Nokia device. We have to wait for some leaks for more information on this device. According to some reports, Nokia may launch their high-end Android powered device in the CES 2017 event next year.

A number of Nokia devices got leaked running Android in the past. The first one is the recently leaked Nokia Pixel that runs on the Android 7.0.1 OS spotted at Geekbench along with entry-level Nokia Ara and Genymotion Nokia C2-00 PureView. The Nokia Pixel was spotted powered by a 1.19 GHz dual-core Qualcomm Snapdragon 200 (MSM8610) processor that we already know supports Qualcomm Quick Charge 2.0 and has a Adreno 302 GPU as well. It comes with 1GB of RAM and scored 404 points in the single-core test and 661 points in the multi-core test.

Another Nokia device that was leaked in the past is the Nokia D1C about which, it is not yet confirmed if it is a Phone or a tablet. The device was spotted listed at Geekbench and AnTuTu benchmarks and was expected to be the upcoming Nokia smartphone. But, the GFXbench listing listed it with a 13.8-inch display turning it to be a tablet instead of a smartphone. We have to wait now for Nokia announcement next year to know more about these devices spotted online in different listings.