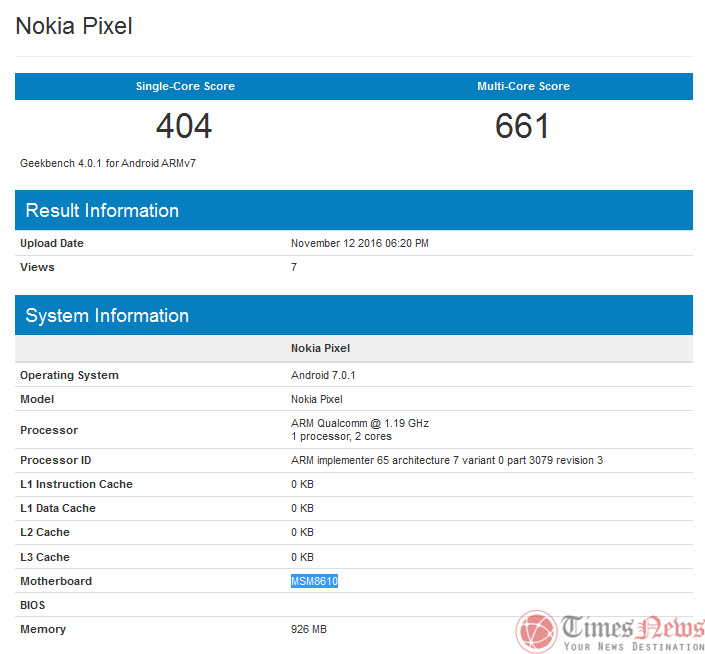 Nokia, that is now owned by the HMD Group, is going to launch new Android powered smartphones in the fourth quarter of the 2016 which is ending this December and we can expect new devices launching by the end of the December from Nokia. Two Android powered Nokia devices has already been spotted at Geekbench namely Nokia 5320 and Nokia RM-1490. Now 3 more devices from Nokia has been spotted at Geekbench and one of the devices running the Android 7.0.1 Nougat OS out of the box. Let’s check them out.

All the devices spotted at Geekbench looks to be the entry-level devices if we check the specs of all the three on Geekbench. First, Nokia Pixel is listed at Geekbench that runs on the Android 7.0.1 Nougat OS and comes powered by a 1.19 GHz dual-core Qualcomm Snapdragon 200 (MSM8610) processor that we already know supports Qualcomm Quick Charge 2.0 and has a Adreno 302 GPU as well. It comes with 1GB of RAM and scored 404 points in the single-core test and 661 points in the multi-core test. No other details from the device specs are listed in the Geekbench listing.

Another device from Nokia is listed with name Nokia Ara at Geekbench that comes with similar specifications like the Nokia Pixel device but with the difference of the Android OS version. It is listed with the Android 5.1.1 OS pre-installed while the Nokia Pixel has a Nougat OS version. Other specs are same as Nokia Pixel like a 1.19 GHz dual-core Qualcomm Snapdragon 200 (MSM8610) processor with 1GB of RAM. It scored 400 points in single-core test and 664 points in the multi-core test. No other specs are listed in the Geekbench test.

The third device listed at Geekbench is listed with an interesting name Genymotion Nokia C2-00 PureView. It comes with Android 6.0 Marshmallow pre-installed and is powered by a 2.99 GHz Intel Pentium G3220 single-core processor and has 1.5GB of RAM. It scores better points than the above two Nokia devices with 2523 points in the single-core test and 2428 points in the multi-core becnhmark test. No other specs of the device are listed at Geekbench, unfortunately.

Last month, GFXBench confirmed that Nokia is also working on a 13.8-inch tablet called Nokia D1C running the Android OS out of the box. It was spotted with features like a 13.8-inch full-HD display with 1920 x 1080 pixel resolution and will be powered by a 1.4GHz octa-core Snapdragon 430 processor along with Adreno 505 GPU. It will have 3GB of RAM and 16GB of inbuilt storage capacity. It will run on the Android 7.0 Nougat OS out of the box with stock Android. It will feature a 16-megapixel rear camera and an 8-megapixel front facing camera.

The Finnish company is expected to launch the new Nokia flagships running the Android operating system next year at the MWC 2017 event in February according to a MWC listing. Stay tuned for further news and updates about the upcoming Nokia devices.