GFXBench confirms Nokia D1C will be a 13.8-inch tablet with 3GB RAM and Snapdragon 430 processor 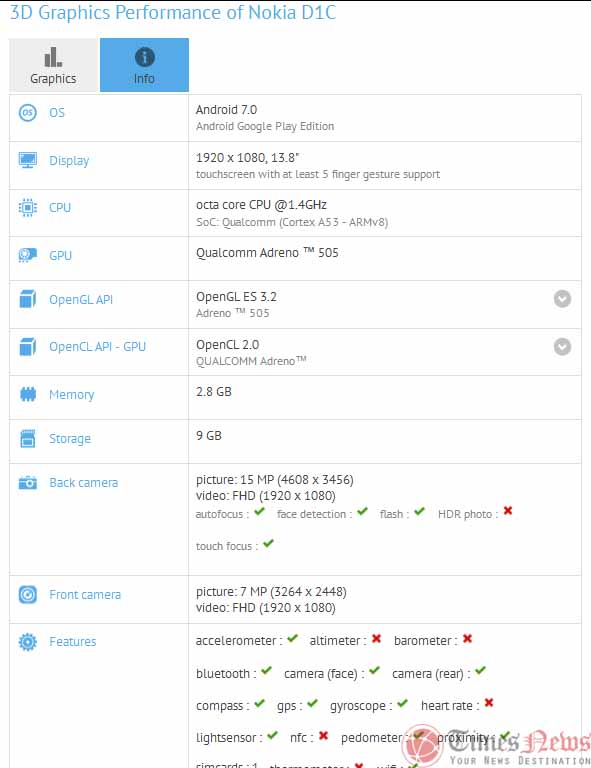 In some recent leaks, we saw that Nokia is working on a new smartphone Nokia D1C that will have 3GB RAM and Snapdragon 430 processor and the company was rumored to launch this phone soon. The device was spotted previously at AnTuTu and Geekbench and their was no mention of the screen size of this device in both benchmarks. But now, the GFXBench listing of the Nokia D1C has confirmed that it will be a tablet rather than a smartphone.

The GFXBench listing confirms that this tablet will have a 13.8-inch full-HD display with 1920 x 1080 pixel resolution and will be powered by a 1.4GHz octa-core Snapdragon 430 processor along with Adreno 505 GPU. It will have 3GB of RAM and 16GB of inbuilt storage capacity. It will run on the Android 7.0 Nougat OS out of the box with stock Android. It will feature a 16-megapixel rear camera and an 8-megapixel front facing camera.

The Nokia D1C was spotted at Geekbench with a 1.40 GHz octa-core Snapdragon 430 (MSM8937) processor that also comes with the Adreno 505 GPU and has 3GB of RAM. It runs on the Android 7.0 Nougat OS out of the box and has scored 656 points in the single-core test and 3120 points in the multi-core test.

At AnTuTu, it was listed with a Full-HD display having 1920 x 1080 pixels resolution and is powered by the Qualcomm Snapdragon 430 processor with Adreno 505 GPU with 3GB of RAM and 32GB inbuilt storage capacity. It runs on the Android 7.0 Nougat OS out of the box. The camera features includes a 13-megapixel rear camera and a 5-megapixel front facing camera.