Geekbench confirms Nokia D1C will be the Nokia’s next Android 7.0 powered phone with 3GB RAM and Snapdragon 430 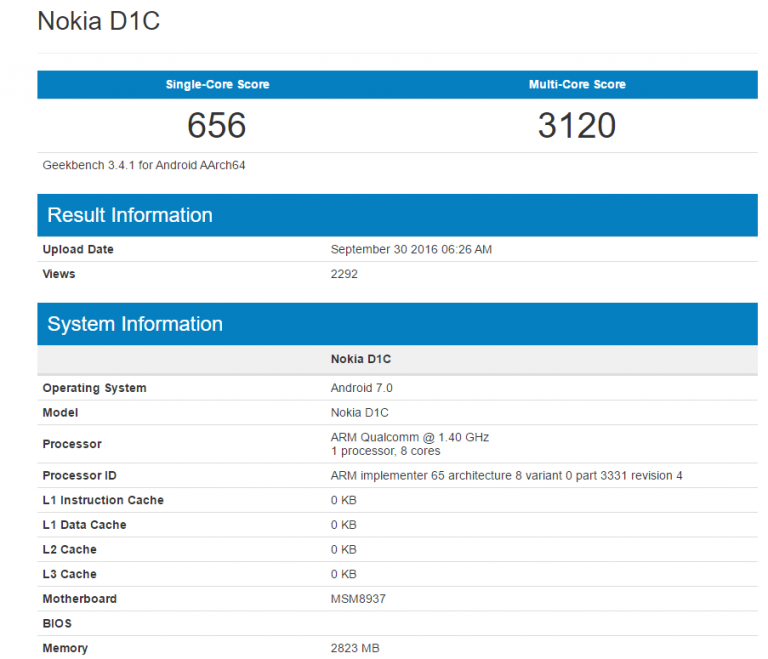 In May this year, Nokia announced that it will re-enter the smartphones market and will launch a new smartphone in the 4th quarter of 2016 which means the company will launch a new Android powered smartphone in these remaining three months of the year 2016. In the past, we saw the rumors saying that Nokia will launch Android 7.0 powered phones with flagship specs including SD820 and 2K display. Now, looks like that news was true as the company is spotted working on a new Android 7.0 powered smartphone with a Snapdragon processor.

The Geekbench listing shows that the Nokia D1C has a 1.40 GHz octa-core Snapdragon 430 (MSM8937) processor that also comes with the Adreno 505 GPU and has 3GB of RAM. It runs on the Android 7.0 Nougat OS out of the box and has scored 656 points in the single-core test and 3120 points in the multi-core test. No other details about the device were available in the Geekbench listing and may have to wait for its more leaks and/or its TENAA listing for the full details on its specifications.

In the past, Nokia was also spotted working on two more mid-range devices Nokia 5320 and Nokia 1490 that were spotted on Geekbench with entry level specifications. So we may expect a bunch of new devices will be launched by the company. Let’s wait and see.