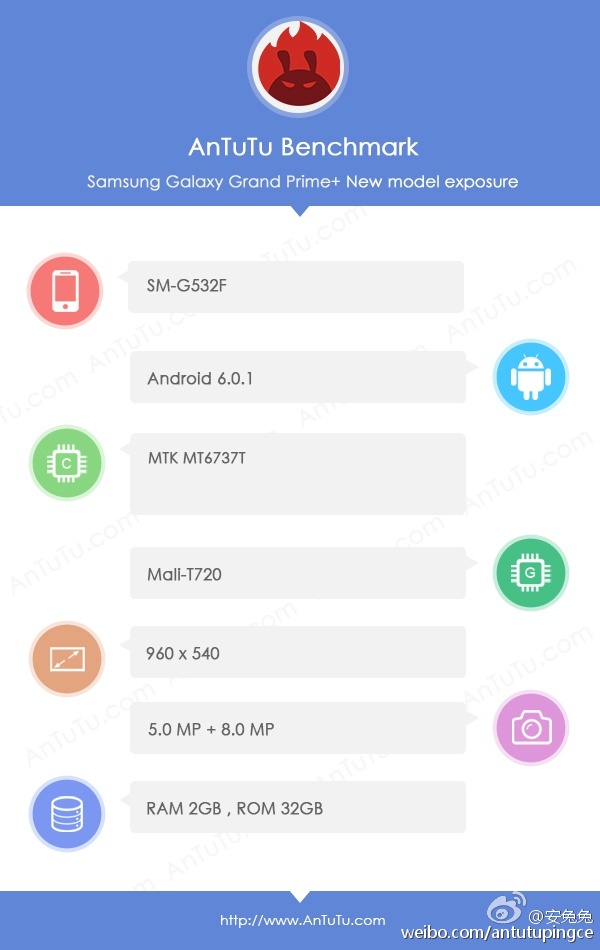 Samsung is going to launch its new smartphone Samsung Galaxy Grand Prime+ soon that was previously rumored as Galaxy Grand Prime (2016) and was surfaced in benchmarks and leaks. The device also got the FCC approval hinting towards its imminent launch. The device has now been spotted listed at AnTuTu database with most of its key specifications listed.

The AnTuTu database lists the Galaxy Grand Prime+ with the model number SM-G532F and comes with a 960×540 pixels resolution display. It is powered by a MediaTek MT6737T processor with Mali-T720 GPU. It comes with 2GB of RAM and 32GB inbuilt storage capacity. It runs on the Android 6.0.1 Marshmallow OS out of the box. The camera features includes an 8-megapixel rear and a 5-megapixel front facing camera. No other details from the device are available in the AnTuTu listing.

The Galaxy Grand Prime+ was also spotted listed at Geekbench and GFXBench with a 1.44 GHz quad-core MediaTek MT6737T processor and 2GB of RAM. It runs on the Android 6.0.1 marshmallow OS out of the box and scored 640 points in the single-core test and 1884 points in multi-core test. No other details are currently listed at GeekBench.

At GFXBench, it was spotted listed with a 1.4 GHz MediaTek MT6737T quad-core processor and Mali-T720 GPU. It has 2GB RAM available and was listed with 5/5.1-inch display having 960 x 540 pixel resolution. It was having 8GB inbuilt storage and featured 8-megapixel rear camera and a 5-megapixel front facing camera. It was spotted running Android 6.0.1 Marshmallow.