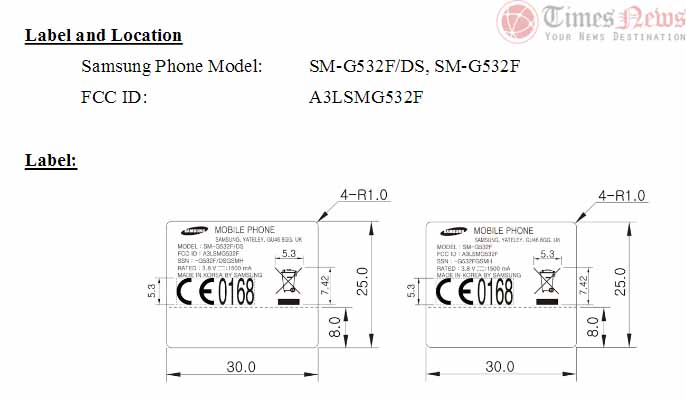 The FCC documents confirms that the Galaxy Grand Prime (2016) comes with two model numbers SM-G532F/DS and SM-G532F. The SM-G532F/DS might be the dual-SIM variant of the phone. It comes with 4G LTE, 3G, Bluetooth LE, WiFi IEEE 802.11b/g/n (2.4 GHz) and other connectivity options. There were no other details listed from the device specifications so we may have to wait for some more leaks.

The Galaxy Grand Prime (2016) with model number SM-G532F is also listed at GeekBench with a 1.44 GHz quad-core MediaTek MT6737T processor and 2GB of RAM. It runs on the Android 6.0.1 marshmallow OS out of the box and scored 640 points in the single-core test and 1884 points in multi-core test. No other details are currently listed at GeekBench.

At GFXBench, it was spotted listed with a 1.4 GHz MediaTek MT6737T quad-core processor and Mali-T720 GPU. It has 2GB RAM available and was listed with 5/5.1-inch display having 960 x 540 pixel resolution. It was having 8GB inbuilt storage and featured 8-megapixel rear camera and a 5-megapixel front facing camera. It was spotted running Android 6.0.1 Marshmallow on GFXBench too.

To recall, the original Galaxy Grand Prime was launched with model number SM-G531 and was having a 5-inch qHD display with 540×960 pixel resolution. It was powered by a quad-core 1.2GHz processor with 1GB of RAM and 8GB of internal storage capacity with a microSD expandable storage slot. It was having an 8-megapixel rear camera and dual-SIM support. A 2,600mAh battery was powering the device.