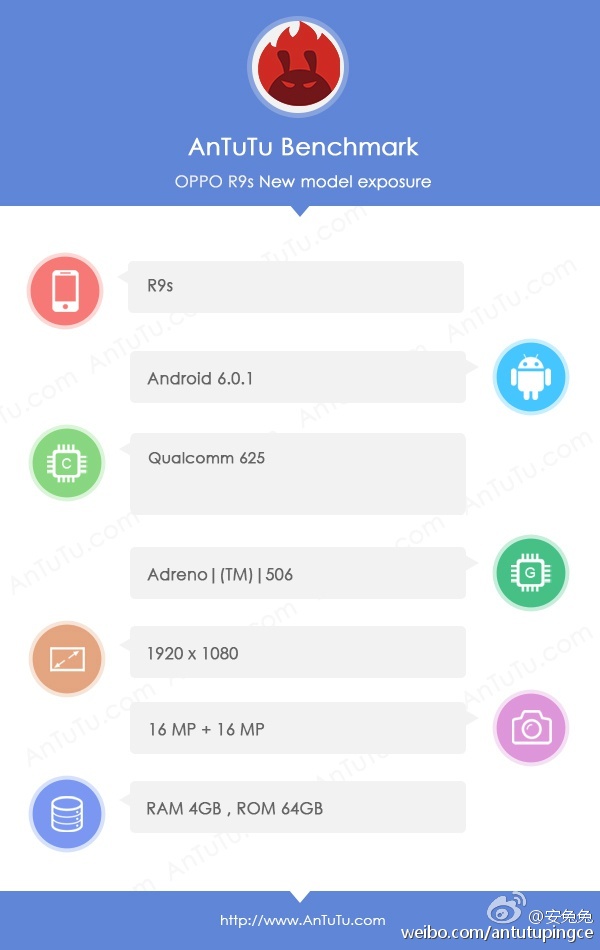 As we know that Oppo is teasing the launch of its new smartphones Oppo R9s and R9s Plus via their social media accounts in China and will launch the devices on October 19th in the country. The device has already got the TENAA approval leaking its specs and images in the full. Now the device has been listed at AnTuTu database with some of the specifications again listed and confirming them.

The AnTuTu database listing for the Oppo R9s confirms the specs again which includes a full-HD display with 1920 x1080 pixel resolution and will be powered by a Qualcomm Snapdragon 625 processor along with Adreno 506 GPU. It comes with 4GB of RAM and 64GB inbuilt storage capacity. It runs on the Android 6.0.1 Marshmallow OS out of the box. It features a 16-megapixel rear and a 16-megapixel front facing camera.

Oppo R9s is rumored to launch with features such as Sony’s new IMX398 sensors having 16-megapixel dual-pixel lenses combo on rear and front side with f/1.7 aperture. It will be powered by a octa-core Qualcomm Snapdragon 625 processor with Adreno 506 GPU and 4GB of RAM with 64GB of inbuilt storage capacity. It will have a large 3010mAh battery with VOOC fast charge feature and will have support for Cat. 7 LTE network. We don’t have any other specifications of the device as of now.

At TENAA, a device has been spotted listed with name OPPO R9km and comes with a 5.5-inch TFT full-HD display with 1080 × 1920 pixel resolution and comes with a 2 GHz octa core processor with 4GB RAM and 64GB inbuilt storage and 128GB expandable storage via MicroSD card slot. It runs on the Android 5.1 Lollipop OS. It features a 13-megapixel rear and a 16-megapixel front facing camera. It is backed up by a 2850mAh battery and supports 4G LTE, 3G, Bluetooth, GPS, WiFi and other options. It measures 151.8 × 74.3 × 6.85 mm and weights 151 grams. It comes with Gold color option.