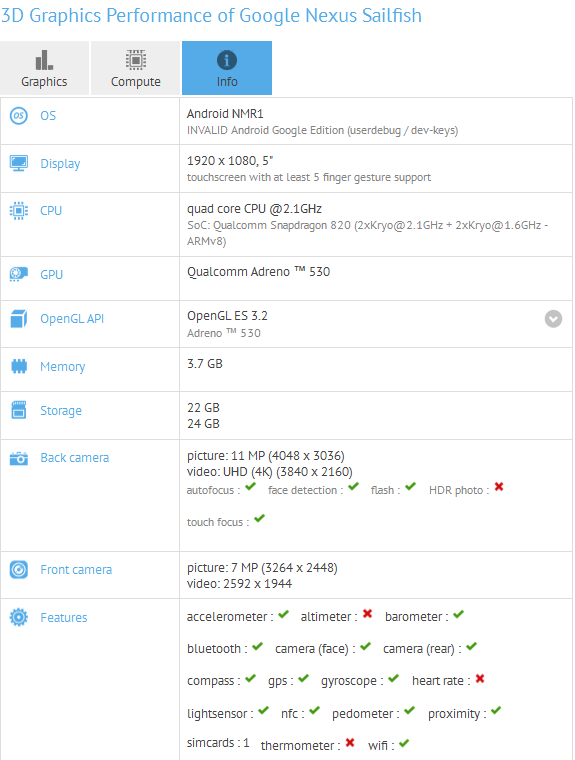 Google is soon going to launch its new Nexus devices that are code named Nexus Marlin and Nexus Sailfish. A possible Huawei made Nexus 6P variant with model numbers H1622 and H710VL were also spotted at FCC. The Nexus Marlin was previously spotted listed at GeekBench with some of the specifications and now its the time for the Nexus Sailfish to get some listings on benchmark websites. The device is listed at GFXBench listing all the major specifications of the HTC Sailfish smartphone.

The GFXbench listing for the Google Nexus Sailfish shows that this upcoming Nexus device will have a 5-inch full-HD display with 1920 x 1080 pixels resolution and will be powered by a quad-core 2.1GHz Qualcomm Snapdragon 820 ([email protected] + [email protected] – ARMv8) processor that also comes with Adreno 530 GPU. It has 4GB of RAM and runs on the Android 7.0 Nougat OS out of the box.

It comes with 16GB and 32GB inbuilt storage options and camera features includes a 12-megapixel LED flash rear camera and an 8-megapixel front facing camera as well. Other features that are listed in the GFXBench listing includes NFC, Bluetooth, GPS, WiFi and couple of sensors as well. No other details are listed in the GFXBench listing of the device. Previously, Evan Blass confirmed that the Android 7.0 Nougat will be launched in August and the Nexus 5 users will not get it.

The Nexus Sailfish was previously rumored to have a 5-inch full HD display with 1920x 1080 pixel resolution and will be powered by an unknown Quad-core 2.0GHz CPU that is now confirmed as the Snapdragon 820 SoC. It will have 4GB of RAM and 32GB of internal storage. Other specifications includes the upcoming Android N OS out of the box. It will feature a 12-megapixel rear camera and an 8-megapixel front facing camera. It will feature a rear mounted fingerprint scanner and there will be bottom firing speakers. It will have a 2,770mAh battery and Bluetooth 4.2, USB Type-C port etc connectivity options. There will be a top mounted headphone jack as well.

The Nexus Marlin rumored specifications includes a 5.5-inch qHD AMOLED display with 2560×1440 pixels resolution and will be powered by the quad-core Qualcomm Snapdragon processor that might be the 821.  It will have 4GB of RAM and 32GB /128GB inbuilt storage options. It will run on the Android (7.0) Nougat OS out of the box and will feature a 12-megapixel rear camera with an 8-megapixel front facing camera. It will have a 3450mAh battery and connectivity options includes Bluetooth 4.2 and USB-C port. It will feature a rear-mounted fingerprint scanner and bottom-firing speakers.