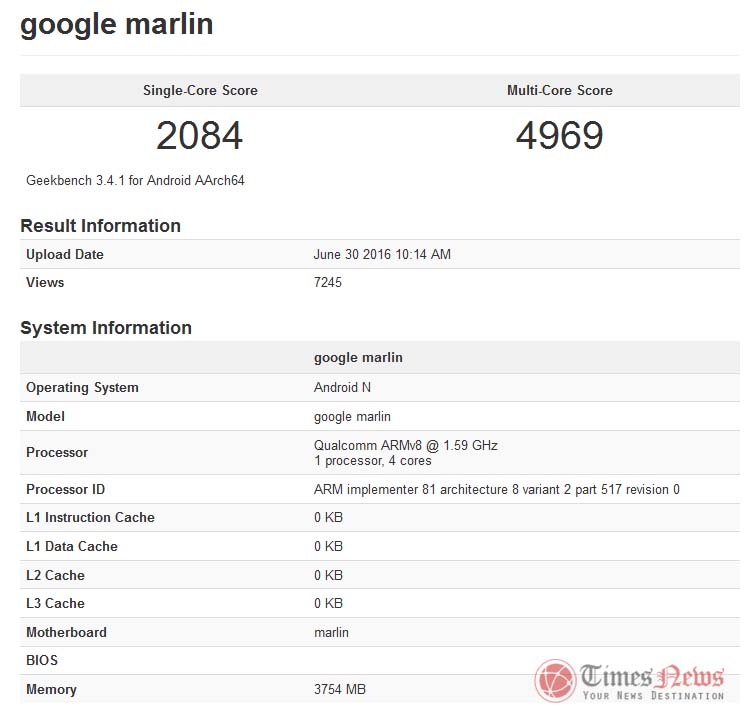 As we already know that next Google Nexus devices code named M1 and S1 that are known as ‘Marlin’ and ‘Sailfish’ in short form are launching soon and the specs of both have leaked in previous occasions. The HTC Sailfish and HTC Marlin was previously spotted in leaked specifications with no images of both. Now a Benchmark listing has confirmed the rumored specifications one of these Google Nexus devices launching this year by HTC.

HTC’s rumored Nexus device ‘HTC Marlin’ is now spotted listed at GeekBench with some of the specifications listed. It is listed with 4GB of RAM and 1.59 GHz quad-core processor that will be the Qualcomm Snapdragon 820/821/823 processor. It will run on Android (7.0) Nougat OS out of the box. It has scored 2084 points in single-core test and 4969 points in multi-core test. No other details about this device were available in the GeekBench listing.

The previous leak confirmed that the HTC ‘Marlin’ Nexus device will have a 5.5-inch qHD AMOLED display with 2560×1440 pixels resolution and will be powered by the quad-core Qualcomm Snapdragon 820, 821 or 823 processor. It will have 4GB of RAM and 32GB /128GB inbuilt storage options.

It will run on the Android (7.0) Nougat OS out of the box. It will feature a 12-megapixel rear camera and an 8-megapixel front facing camera. It gets powered by a 3450mAh battery and connectivity options includes Bluetooth 4.2 and USB-C port. It will feature a rear-mounted fingerprint scanner and bottom-firing speakers as well according to the leak.

The HTC “Sailfish” specifications were also leaked that confirmed a 5-inch full HD display with 1920x 1080 pixel resolution and will be powered by an unknown Quad-core 2.0GHz CPU. It will have 4GB of RAM and 32GB of internal storage. It runs on Android N OS out of the box and will feature a 12-megapixel rear camera with an 8-megapixel front facing camera. It will feature a rear mounted fingerprint scanner and there will be bottom firing speakers. It will have a 2,770mAh battery and Bluetooth 4.2, USB Type-C port etc connectivity options. There will be a top mounted headphone jack as well.