Samsung to announce Galaxy C series on May 26 ? 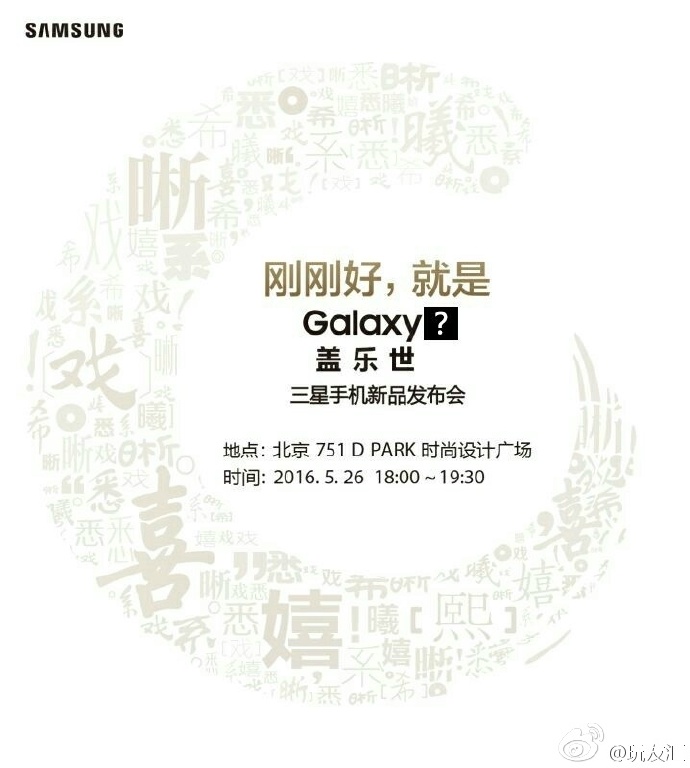 Samsung has a number of devices in different series of Galaxy smartphones includes Galaxy S, Galaxy E, Galaxy J and Galaxy A. In the past, the Korean giant plans for launching its Galaxy C series got leaked with two new smartphones Galaxy C7 (SM-C7000) and Galaxy C5(SM-C5000). Both the device got leaked in images, AnTuTu and GFXBench listings. The company has now started sending the invites for its May 26 event in China where the company is expected to launch its Galaxy C series of devices.

A weibo user has posted the leaked invite poster on his profile that shows “Galaxy ?” text that clearly hints towards the launch of the Galaxy C series. As far as specifications are concerned, the Galaxy C7(SM-C7000) was spotted at AnTuTu that confirms that it will have a Full HD display with 1920×1080 pixel resolution with a 5.5-inch display, the octa-core Snapdragon 625 processor with Adreno 506 GPU, 4GB of RAM, 32 of inbuilt storage capacity, Android 6.0.1 Marshmallow OS, a 16-megapixel rear LED flash camera and an 8-megapixel front facing camera. The AnTuTu listing doesn’t have any other details.

The Galaxy C5 (SM-C5000) was spotted at GeekBench with the Android 6.0.1 Marshmallow OS, the octa-core 1.52 GHz Snapdragon 617 MSM8952 processor with Adreno 405 GPU and 4GB of RAM. The listing doesn’t have any other details about this device. The GeekBench listing shows that this device has scored 640 points in single core test and 3163 points in its multi-core test. Zauba listing also confirmed that it will have a 5.2-inch display and INR 13,625 (around $205) price tag.

Let’s wait for the May 26 event to check what surprises the tech giant will give to us. Stay tuned.