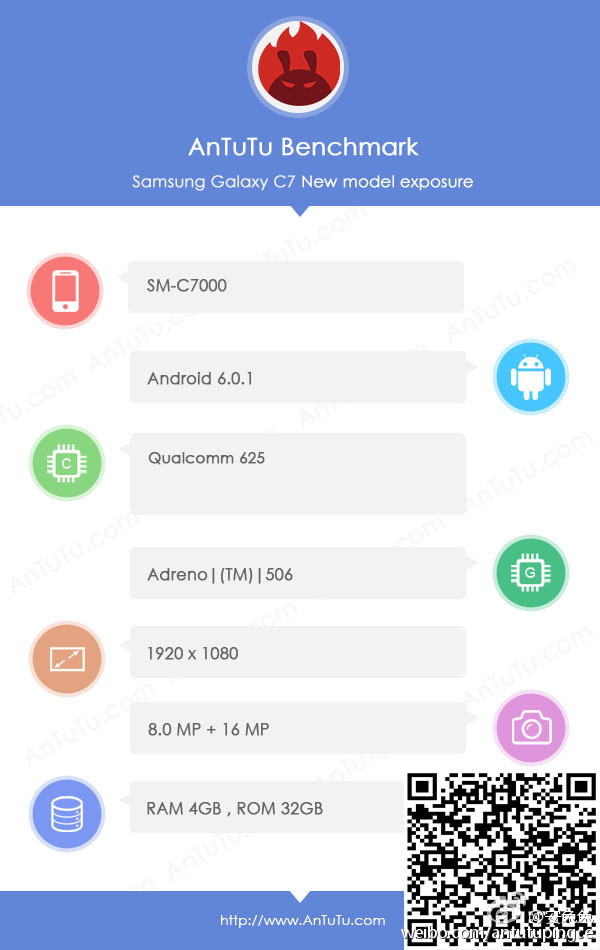 Last month, we got some news about the new Galaxy C series of Samsung that was rumored to get the Galaxy C5 (SM-C5000) and Galaxy C7 (SM-C7000) smartphones first. The Galaxy C5 with model number SM-C5000 was spotted on Zauba listing and a few days back on GeekBench browser also with some of the key specs listed in the listing. There were no news about the Galaxy C7 till now. But now, the Galaxy C7 with model number SM-C7000 has just made its appearance on AnTuTu database listing the specifications of the device.

The AnTuTu listing for the Samsung Galaxy C7 (SM-C7000) confirms the rumored specs like a Full HD display with 1920×1080 pixel resolution and its is expected to feature a 5.5-inch display. The Galaxy C5 will have a 5.2-inch display. It will be powered by the octa-core Snapdragon 625 processor with Adreno 506 GPU and 4GB of RAM. It also has 32 of inbuilt storage capacity.

It runs on the Android 6.0.1 Marshmallow OS out of the box. It features a 16-megapixel rear LED flash camera and an 8-megapixel front facing camera. The listing doesn’t have any other details as of now. We can expect the TENAA listing for both the Galaxy C5 and Galaxy C7 soon with full details of specs and images.

The rumors says that the Galaxy C7 will feature a fingerprint scanner on the home button and will have 4G LTE, Wi-Fi, Bluetooth v 4.1 and GPS connectivity options as well. The battery capacity of this phone is still unknown but a 3000+ mAh battery is expected for a 5.5-inch display device.

The Galaxy C5 SM-C5000 GeekBench listing shown previously that this device will run on the Android 6.0.1 Marshmallow OS out of the box. It will run on the octa-core 1.52 GHz Snapdragon 617 MSM8952 processor with Adreno 405 GPU and will feature 4GB of RAM. The listing doesn’t have any other details about this device, so we have to wait for its GFXBench listing and TENAA listing for more details on the design and features of this phone. The Zauba listing of the Galaxy C5 confirmed previously that it will have a 5.2-inch display and will be priced at INR 13,625 (around $205).