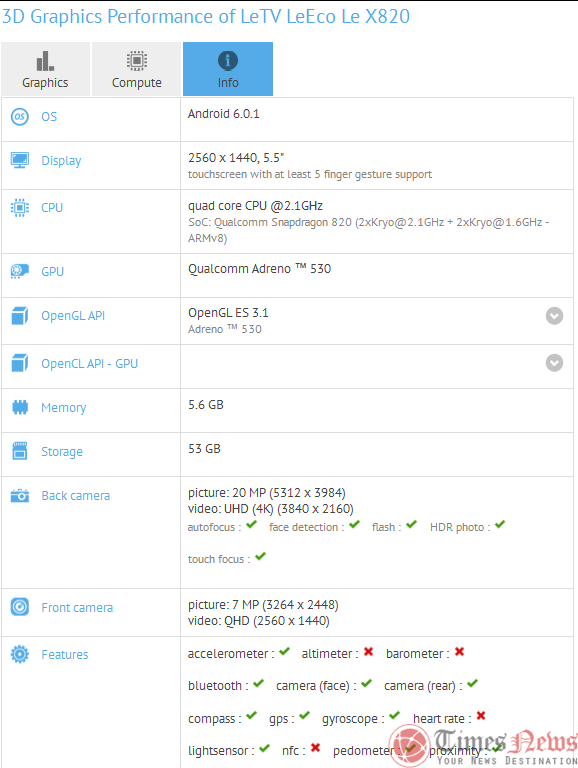 A new GFXBench listing of the unannounced LeTV LeEco Le X820 smartphone has just revealed that it will feature 6GB of RAM and will be powered by the Snapdragon 820 chipset. This will be the second smartphone to feature 6 gigs of RAM as previously Vivo XPlay 5 featured the same amount of RAM. This device is expected to launch as the LeTV LeEco Le Max 2. Letv Le Max 2 (X821) was spotted on AnTuTu with 4GB of RAM and Le X621, Le X620 and Le X525 has got the TENAA approval this month already with 3GB RAM. So the company is expected to launch the multiple variants of the device with 3GB, 4GB and 6GB of RAM.

The GFXBench listing for the LeTV LeEco Le X820 reveals a 5.5-inch QHD display with 2560 x 1440 pixel resolution and will be powered by the quad-core 2.1GHz Qualcomm Snapdragon 820 ([email protected] + [email protected] – ARMv8) processor with Qualcomm Adreno 530 GPU. This device features 6GB of RAM and 64GB inbuilt storage capacity. It runs on the latest Android 6.0.1 Marshmallow OS out of the box.

Letv Le Max 2 (X821) AnTuTu benchmark revealed that it will have a a 2560 x 1440 pixel resolution, however the screen size is not listed in the benchmark of the device. It is powered by the Qualcomm Snapdragon 820 processor with Adreno 530 GPU. The device has 4GB of RAM and 32GB of inbuilt storage capacity. It runs on the Android 6.0.1 Marshmallow OS out of the box. It features a 21-megapixel rear camera and a 1n 8-megapixel front facing camera as well. The device is spotted on the India import/export database website Zauba that has confirmed that the LeTv Max 2 will be priced around INR 22,664 (around $340) in India at the time of the launch.

The LeTV Le X621 TENAA listing has confirmed that it will have a 5.5-inch full hd bezel-less display with 1920 × 1080 pixel resolution and is powered by a 2.3GHz deca-core processor which will be the Helio X25 processor. It comes with 3GB of RAM and 32GB of inbuilt storage capacity with no expandable storage slot. It runs on the Android 6.0 Marshmallow out of the box. It features a 16-megapixel rear camera with dual tone LED flash and an 8-megapixel front facing camera as well.

This phone is backed by a 3000mAh non-removable battery and comes with different connectivity options like 4G LTE with VoLTE, 3G, Wi-Fi, Bluetooth, Infrared, JAVA, GPS and a USB Type-C port. It measures 151.1 × 74.1 × 7.7 mm and weights 153 grams. It comes with Gold, silver and gray color options. it also comes with a fingerprint scanner in a sqaure shape, while the leaked images were having a circled fingerprint scanner.