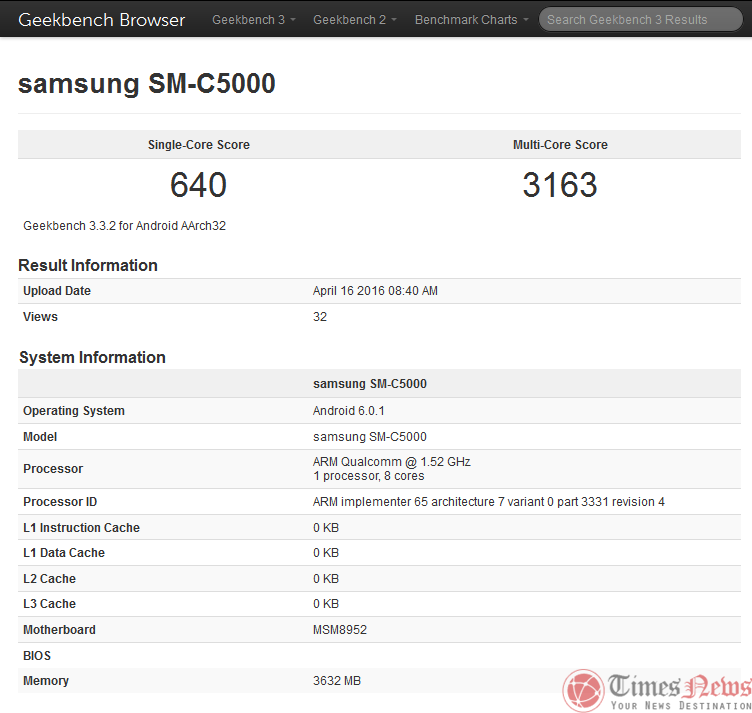 Samsung was recently spotted working on the new galaxy C series smartphones with the SM-C5000 found imported to India and was found listed on Zauba database, an Indian import/export website. The device was spotted with a 5.2-inch display and around INR 13,625 (around $205) on Zauba with no more details available in the Zauba listing. Now, the unannounced model number SM-C5000 has been spotted again, but this time on a bench-marking platform, listing some of its key specifications.

The unannounced model number SM-C5000 will be the model number of the rumored Samsung Galaxy C5 smartphone. The name of the phone is not yet official and can be changed with its launch. The GeekBench listing of the SM-C5000 shows that this device will run on the Android 6.0.1 Marshmallow OS out of the box.

It will run on the octa-core 1.52 GHz Snapdragon 617 MSM8952 processor with Adreno 405 GPU and will feature 4GB of RAM. The listing doesn’t have any other details about this device, so we have to wait for its GFXBench listing and TENAA listing for more details on the design and features of this phone.

The GeekBench listing shows that this device has scored 640 points in single core test and 3163 points in its multi-core test. The rumors in the past also revealed that Samsung is also working on the SM-C7000 model number that is expected to be called as the Samsung Galaxy C7 and will have upgraded features than the Galaxy C5 (SM-C5000) smartphone.

The Zauba listing of the Galaxy C5 smartphone have confirmed previously that it will have a 5.2-inch display and will be priced at INR 13,625 (around $205). The price tag hints towards a mid-range device but we have to wait for the official confirmation fist to make any guesses about the specifications of this device. Reportedly, 4 pieces of the device have been imported to India from China for research and development related works. So these might be the dummy phones of the unannounced smartphone.