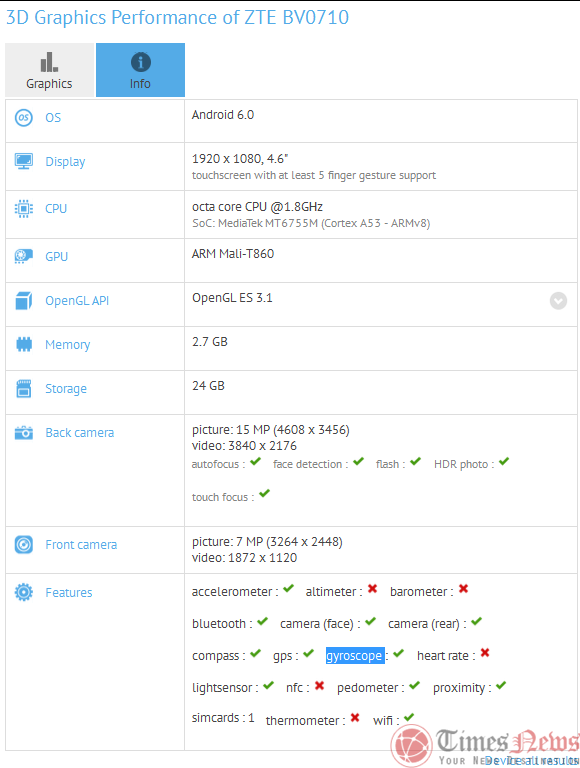 ZTE has announced a number of new Blade series devices in different markets in past 2-3 months. At MWC, ZTE announced the ZTE Blade V7 and Blade V7 Lite, they also launched the ZTE Blade D2 in the first week of March and ZTE Blade V580 was launched a couple of days ago. We may see another ZTE Blade series device to be launched soon as a new device from ZTE has just been spotted in the GFXBench database with some of the specifications. The device name is ZTE BV0710 and it comes with smaller screen with top-end specs.

The GFXBench listing for the ZTE BV0710 shows that this device has a 4.6-inch display with 1920 x 1080 pixel resolution and is powered by a 1.8GHz octa core MediaTek MT6755M (Cortex A53 – ARMv8) processor with ARM Mali-T860 GPU and 3GB of RAM. This device has 32GB of inbuilt storage and it runs on the Android 6.0 marshmallow OS out of the box. It features a 16-megapixel rear camera with LED flash and an 8-megapixel front facing camera as well.

Other features includes Bluetooth, GPS, Single-SIM and WiFi connectivity options and altimeter, accelerometer, proximity, pedometer sensors and gyroscope. No other details are listed in the GFXBench listing for this device, so we have to wait to get the details of its other specs like battery, design etc.

ZTE has announced ZTE Blade V580 in Japan few days back that comes with a 5.5-inch full HD display with 1080 × 1920 pixel resolution and is powered by a 64bit 1.3GHz MediaTek MT6753 processor. It features 2GB of RAM and 16GB of inbuilt storage capacity with microSD card expandable storage capacity up to 32GB. It runs on Android 5.1 Lollipop OS out of the box. It supports Dual SIM connectivity and comes with a fingerprint sensor also. It features a 13-megapixel rear and a 5-megapixel front facing camera.  It is backed up by a 3,000mAh battery and connectivity options includes 4G LTE, WiFi (IEEE 802.11 b / g / n), Bluetooth 4.0, GPS / AGPS, USB etc. It will be available in Silver and gray color options.