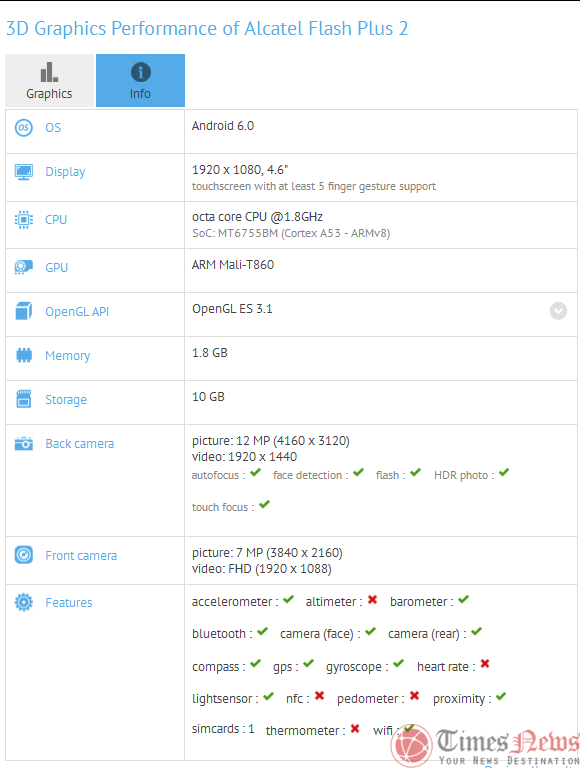 The GFXBench listing for the Alcatel Flash Plus 2 comes with specifications like a 4.6-inch display with 1920 x 1080 pixel resolution and is powered by an 1.8GHz octa-core MediaTek MT6755BM (Cortex A53 – ARMv8) processor with ARM Mali-T860 GPU and 2GB of RAM. It comes with 8GB of inbuilt storage capacity and runs on the latest Android 6.0 Marshmallow OS out of the box. It features the same 13-megapixel rear auto focus flash camera and the 8-megapixel front facing camera. It comes with other features like Single SIM, WiFi, Bluetooth, Compass, Ligh sensor and proximity sensor.

The company is rumored to be working on a new Idol Pro 4 smartphone that is rumored to come with specifications like a 2k display with Qualcomm Snapdragon 820 processor and 4GB of RAM. It will run on Windows 10 Mobile Redstone 1 OS out of the box. It is expected to launch with a 22-megapixel rear camera and a 10-megapixel front facing camera as well. It will have 64GB of internal storage capacity and T-Mobile is expected to launch this device in the United States.

To recall, Alcatel Flash Plus was launched with a a 5.5 inch Full HD display with 1280 x 720 pixels resolution and Dragontrail Glass protection. It is powered by a 64 bit MediaTek MT6752M Octa Core processor. It supports dual SIM and runs Android KitKat 4.4.4. It has 2GB of RAM and 16GB storage with 32GB expandable card storage support. It features a 13-megapixel auto focus camera (SONY IMX214) with LED flash and a front 8-megapixel auto focus camera. Connectivity options includes 4G LTE, 3G, 2G, Wi-Fi, Bluetooth 4.0 and GPS with A-GPS support. It has a 3500 mAh Li-ion battery.