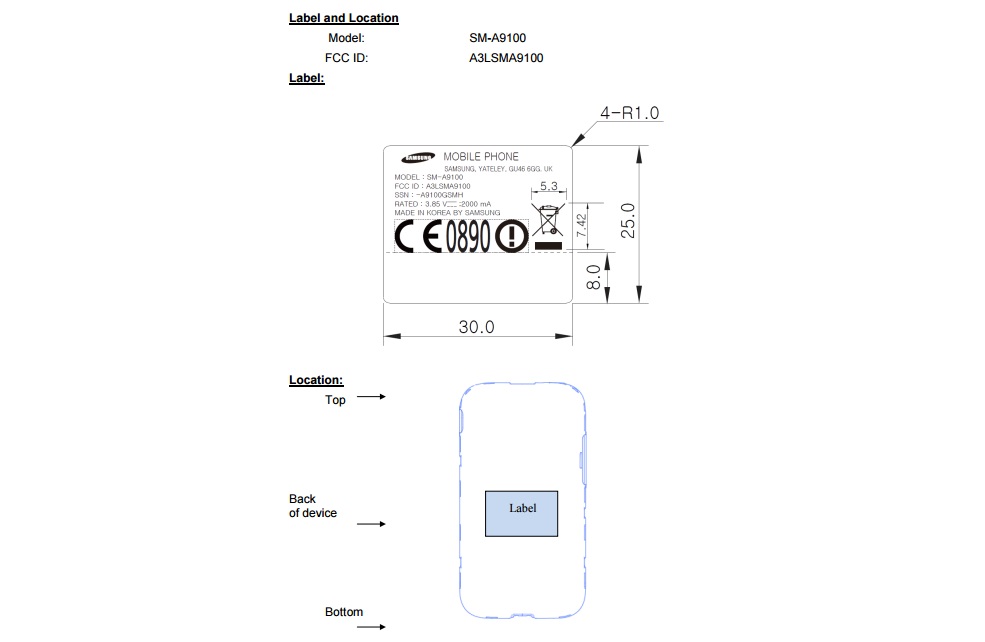 After TENAA, the upcoming pro variant of the Samsung’s current flagship Galaxy A9 in the Galaxy A series known as Samsung Galaxy A9 Pro has just got the FCC approval in the US. The Galaxy A9 pro comes with model number SM-A9100 as per the FCC documents which is same as the TENAA approved device. The Galaxy A9 Pro is now expected to launch soon as its approved by TENAA and FCC and the launch may happen anytime soon.

The Galaxy A9 Pro was spotted on Chienese regularity authority TENAA with specifications like a 6-inch Super AMOLED display with 1080 x 1920 pixels resolution and is powered by 1.8GHz octa-core Qualcomm Snapdragon 652 processor with 4GB of RAM. It runs on Android 6.0.1 Marshmallow OS out of the box.

It features a 16-megapixel rear camera and an 8-megapixel front-facing camera which is a slight upgrade from the Galaxy A9’s 5-megapixel and 13-megapixel cameras. It comes with 32 GB of internal storage capacity with 128GB expandable storage slot. It comes with connectivity options like 4G LTE, 3G, 2G, USB, Bluetooth and other standard connectivity options as well. It measures 161.7 × 80.9 × 7.9 mm and weights 210 grams. It is listed in Black, gold and white color options on the TENAA listing.

Nothing of the above specs are officially confirmed by the company, so, we have to wait for Samsung to officially announce this device in the upcoming days. Stay tuned for more news and updates.