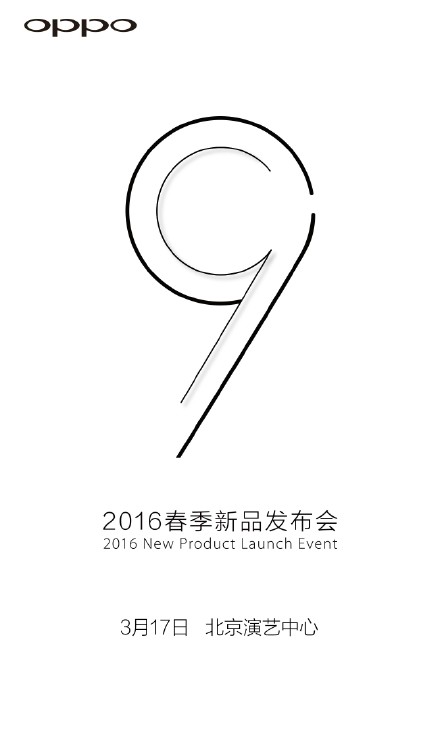 Oppo has recently got the approval for two flagship device Oppo R9 and Oppo R9 plus on TENAA in China revealing the specs and images of both the unannounced devices. The company was already teasing the device on their weibo account but there was no information till now about the launch date. We were already expecting that Oppo will soon announce the event date where it will unveil both the devices. There is a good news, as the company has now finally announced the event date. Oppo has announced the event date March 17 on their weibo account where the company is expected to launch both the flagship devices.

Oppo has released a new teaser on their weibo account announcing the event date with a big ‘9’ and the event date. The Oppo R9 was approved by TENAA recently with specs like a 5.5-inch OLED display with 1080 × 1920 pixels resolution and will be powered by a 1.95GHz octa-core processor according to the TENAA listing which could be the Helio X10 processor. It has 4GB of RAM and 32GB internal storage capacity with 128GB expandable storage capacity.

It runs on Android 5.1 Lollipop OS out of the box and will feature a 16-megapixel rear and 16-megapixel front facing camera as well. It will support Dual Sim and will have a 2850mAh battery. It will support 4G LTE, USB, Bluetooth etc connectivity options. It measures 151.8 × 74.3 × 6.5 mm and weights 145 grams. Color options includes Gold and silver.

The Oppo R9 Plus comes similar specs like Oppo R9 but with some differences. It has a large 6-inch AMOLED display with 1920 × 1080 pixel resolution and is powered by a 1.8GHz octa-core processor may be the Snapdragon 652 soc. It has 64GB internal storage and 128 GB expandable storage and runs on Android 5.0 Lollipop OS out of the box. It is rumored to have a a 4120mAh battery. other features remains same like 4GB RAM, 16-megapixel cameras on rear and front panel, Dual SIM, 4G LTE, USB, Bluetooth etc connectivity options. It measures 163 × 80.8 × 7.4 mm and weights 185 grams. Color options includes Gold and rose gold.

So, stay tuned for more updates from the event that is scheduled for 17th March. Stay tuned.