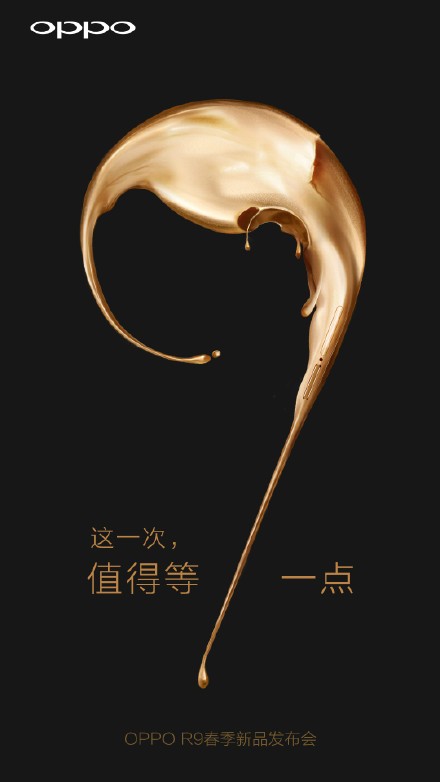 Oppo has started teasing the rumored OPPO R9 smartphone on their weibo account and has confirmed the OPPO R9 name too. The event date is not available in the official teaser which will be available in the next teaser of Oppo. There are rumors that Oppo R9 looks just like the iPhone 6s Plus and the teaser also confirms that the Oppo R9 smartphone will be a camera centric phone. The teaser comes with a big “9” number and the Chienese text is translated as “This time, it is worth and other “9” point. #OPPO New camera phone R9 #”.

Oppo is also rumored to launch the Oppo Find 9 flagship smartphone but looks like the company will launch the Find 9 smartphone not before next year. The Oppo R9 is rumored to come with a 6-inch display with 1440 x 2560 pixel resolution and will be powered by a quad-core Snapdragon 820 processor with Adreno 530 GPU and 3 GB RAM or 4GB RAM. It will have 64 GB of internal storage that can be further expanded to 128 GB via MicroSD card.

It is rumored to have a a 21-megapixel rear camera and a 13-megapixel front camera. It will runs on Android Lollipop or Marshmallow OS out of the box. There will be a a 3700 mAh battery and will also have a Fingerprint scanner. The device is expected to comes with 4G LTE, Wi-Fi 802.11 a/b/g/n/ac, WiFi Direct, hotspot, Bluetooth 4.0 and A-GPS connectivity options. It is expected to be priced between #350 to $400 at the time of its launch.

The above specs of the device are not officially confirmed. We have to wait for the Oppo event that will give us the more details of the device. Stay tuned for more news and details.