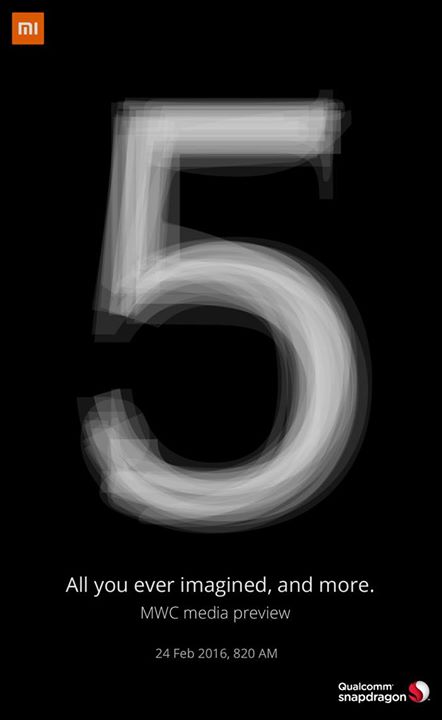 Xiaomi has already announced that they will launch the next flagship called the Xiaomi MI 5 on February 24 in Beijing, China in an official event. Now, the company’s vice president Hugo Barra has announced via his Facebook post that Xiaomi will showcase the MI 5 in the MWC 2016 event also in Barcelona. This will be the Xiaomi’s first ever event in MWC in Barcelona. The MI 5 has already got so much popularity online from a number of leaks and rumors. Xiaomi is also expected to launch the bigger brother of the MI 5 called the MI 5 Plus in this event in China as well as in MWC 2016 in Barcelona.

Hugo Barra wrote,”Today, I’m excited to tell you guys that, for the first time ever, Xiaomi will also showcase Mi 5 at the Mobile World Congress in Barcelona. We’re holding an invitation-only media preview on February 24, the very same day of our launch event in Beijing, and I’ll be on stage.” There is no news if Xiaomi has any plans for launching the MI 5 Plus as well in this event along with MI 5.

As we already discussed, MI 5 has been leaked a number of times in leaked renders and in a video. A few days back, a new image surfaced on weibo showing the front panel of the device. The device was also spotted listed on Chinese gearbest website with full specifications and images. Xiaomi also faced legal issues before the launch of the MI 5 and MI 5 Plus when a US based firm sued the Chinese O.E.M. for patent infringement.

The MI 5 rumors has already confirmed that it will have two variants with one having 3GB of RAM and 32GB inbuilt storage and the other will have 4GB of RAM and 64GB of inbuilt storage. MI 5 will have with a 5.2-inch QHD display with 2560 x 1440 pixel resolution with Corning Gorilla Glass protection. It will be powered by the Quad Core 1.8GHz Snapdragon 820 SoC and will run on MIUI 7 based on Android 5 Lollipop OS out of the box.

It will feature a 16-megapixel rear camera with f/2.2 aperture and an 8-megapixel front facing camera with rear camera capable of 4K video recording. It will be backed up by the 3,600mAh non-removable battery. The device will also come with a fingerprint scanner available in the physical home button of the phone. Connectivity options includes 4G LTE, Bluetooth 4.0, GPS, WIFI 802.11a/b/g/n/ac, A-GPS, GLONASS, BDS, OTG, NFC and Dual SIM connectivity.

The bigger brother of the MI 5, Xiaomi MI 5 Plus, is rumored to have a 5.5-inch or 5.7-inch 2K display and will be powered by the same quad-core Snapdragon 820 SoC with 4 GB RAM. It will have 32 GB eMMC inbuilt storage and will feature the same 16 MP rear and 8 MP front facing cameras. Other specs are expected to be same as the MI 5. It is expected to be priced at around 2500 Yuan.

Are you excited to see the MI 5 at the MWC event at Barcelona? Share with us via comments.