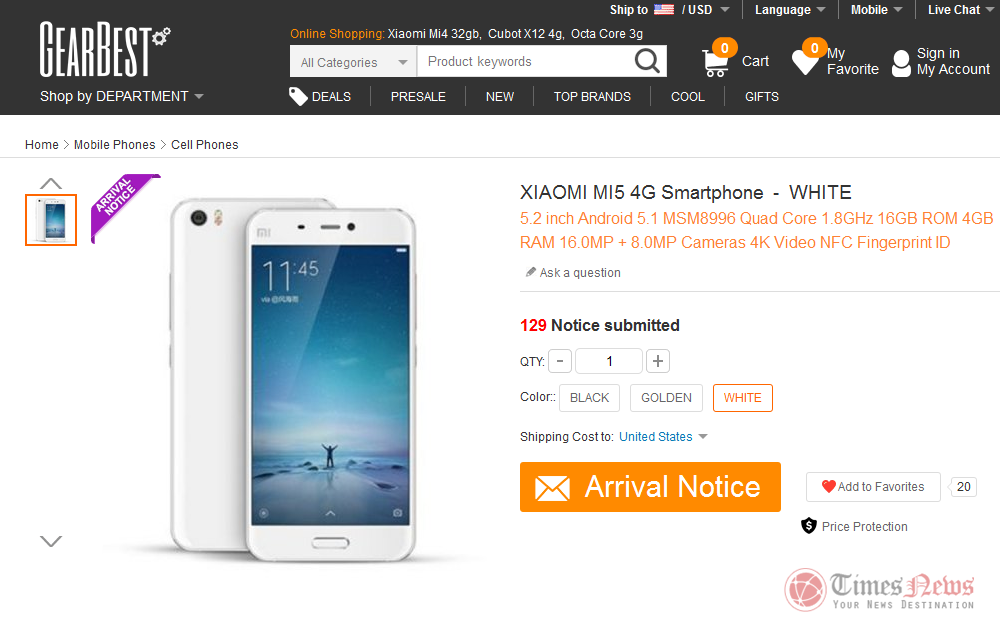 The Xiaomi’s upcoming flagship Xiaomi MI 5 is rumored from a long time since the MI 4 launch last year in January. The device gets leaked quite a few times with its HD renders and video. The device is already China’s 3C certified and has also faced legal issues before its launch. Some analysts have already speculated that the MI 5 will not be launched in the year 2016 but now the device is listed by a China based e-retailer Gearbest with multiple color options and prices revealing the specs and images of the device. The renders on different Gearbest listing matches with the renders leaked last month.

Gearbest has listed the device with price range starting $551.72 to $641.89 for different color variants with same specifications. The listing confirms that the Xiaomi MI 5 comes with a 5.2-inch QHD display with 2560 x 1440 pixel resolution with Corning Gorilla Glass protection. It has 4GB of RAM and 64GB of internal storage and is powered by the Quad Core 1.8GHz Snapdragon 820 processor. The device’s camera is also capable of 4K video recording as per the listing.

It features a 16-megapixel rear camera with f/2.2 aperture and an 8-megapixel front facing camera. It is backed up by the 3,600mAh non-removable battery. The device also comes with a fingerprint scanner available in the physical home button of the phone. Connectivity options includes 4G LTE, Bluetooth 4.0, GPS, WIFI 802.11a/b/g/n/ac, A-GPS, GLONASS, BDS, OTG, NFC and it also supports Dual SIM connectivity. It runs on Android 5.1 Lollipop based MIUI 7 OS out of the box. It is listed in Black, Gold and White color options on the e-retailer website.

Nothing of the above specs have been officially confirmed by the Chinese company yet. The MI 5 is rumored to launch on February 20th which is just a month away from now and we can expect that Xiaomi will launch the device with above stated specs.