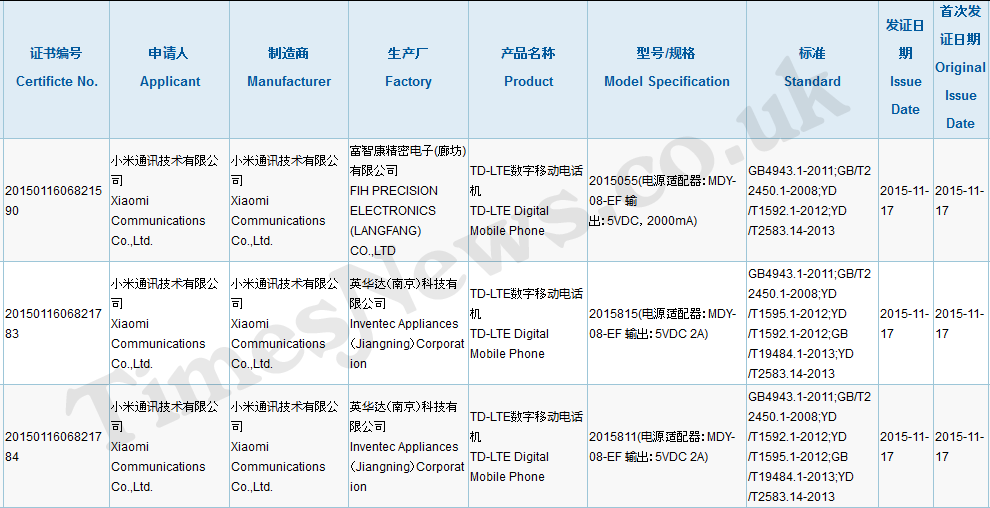 Xiaomi is going to launch a new mobile device on 24th November which is just a week away from now. According to the rumors, in this event, Xiaomi will launch the MI Note 2 Pro that comes with full metal body. Xiaomi can also launch the latest flagship device MI 5 in this event as well. We can also predict that, Xiaomi may launch the MI Pad 2 in this event that was recently seen in the geekbench benchmarking database revealing its specifications. Now looks like MI 5 is also 3C certified in China.

MI 5 was listed by the Geekbench browser as “Xiaomi Gemini”. it was listed with a 64-bit quad-core Qualcomm Snapdragon 820 processor, 3GB of RAM and it runs on Android 6.0 Marshmallow out of the box. This phone scored scores of 2140 and 4762 on single-core and multi-core in the test. Other specifications of the phone are still unknown at the moment.

Xiaomi MI Pad 2 was also seen in the Geekbench Benchmark database, confirming that the tablet will be powered by a 2.24 GHz Intel Atom x5-Z8500 quad-core processor. It will have 2 GB of RAM and runs on the Android 5.1 Lollipop OS out of the box. it will have a large 7.9-inch display if we believe the rumors.

So, the summary is, total of 3 devices can be expected in the event on 24th November. It may be either the Redmi Note 2 Pro or the Mi 5 or the Mi Pad 2. Nothing of the above is officially confirmed by the Xiaomi. Its in the hand of Xiaomi now, may be some other new device is in the list instead of the above discussed three devices that may be launched in the event.

So, let’s wait for the Xiaomi’s event on November 24th to check what mobile device will they launch in the official event going to be held in the China National Convention Center. Stay tuned for more related updates.