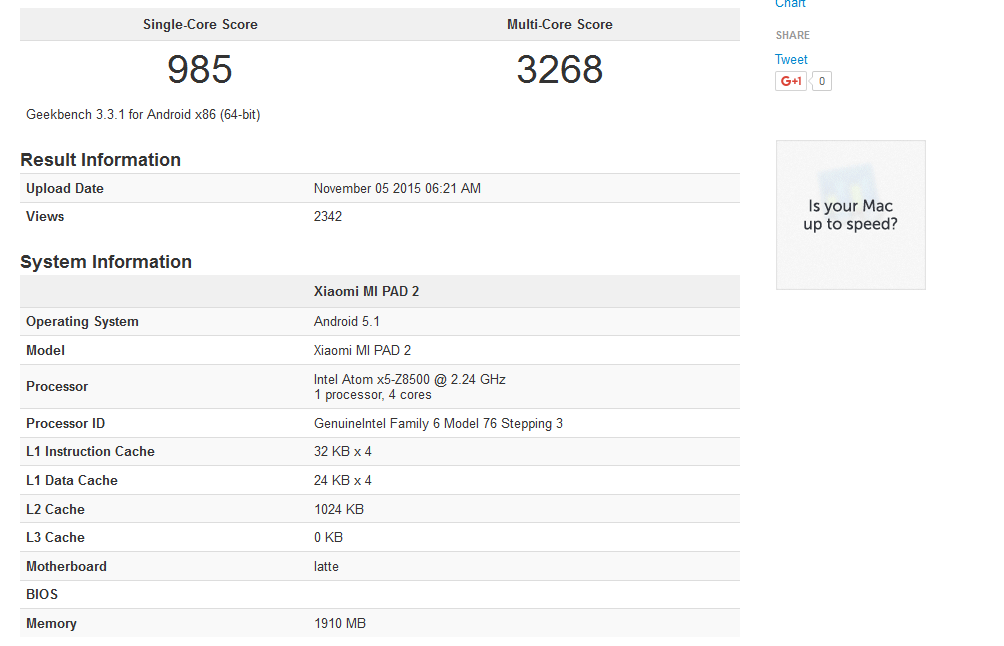 Xioami recently posted a teaser on their Weibo account with a smartphone behind curtain and a big question mark sign on the curtain. There were rumors that the event with title “Dual 11” will see the launch of two new smartphones including MI 5 and Redmi Note 2 pro. But that haven’t happened till now. In addition, we also have rumors that Xiaomi is working on the new Xiaomi MI PAD 2 tablet too, which will be the successor of the MI Pad tablet launched in March this year.

Xiaomi MI PAD 2 is now listed on the Geekbench bench-marking database revealing some of its specifications. Xiaomi MI PAD 2 scores 985 single-core points and 3268 multi-core points. The Geekbench database listing shows that MI Pad 2 will be powered by a 2.24 GHz Intel Atom x5-Z8500 quad-core processor. Further the listing reveals that it will have 2 GB of RAM and runs on the Android 5.1 Lollipop OS out of the box.

Its worth mentioning that the Intel Atom x5-Z8500 quad-core processor supports 2k display, so we may see a 2k display on MI Pad 2 tablet. There are rumors that MI Pad 2 will feature full metal body. Other rumors suggests that MI Pad 2 will have two storage variants with a 13MP rear camera. As far as the pricing is concerned, it is expect to be priced between $300 to $350 and we can see its launch soon by the company.

Another device with name Xiaomi Gemini is also listed on Geekbench which can be the Xiaomi MI 5 smartphone. The Xiaomi device with name “Gemini” is listed with 64-bit quad-core Qualcomm Snapdragon 820 processor and 3GB of RAM. It runs on Android 6.0 Marshmallow out of the box.

So let’s wait for Xiaomi to announce these two devices soon. Stay tuned.