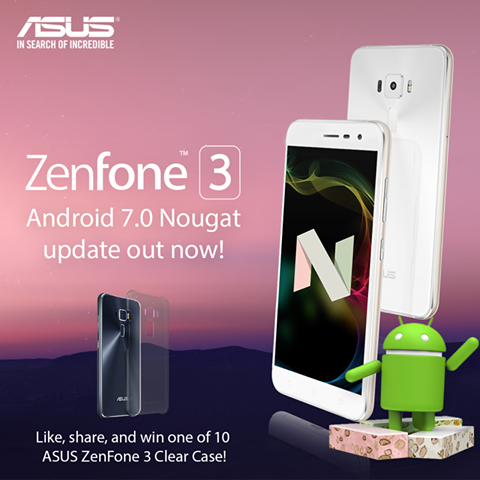 Asus recently launched the Zenfone 3 Zoom and Zenfone AR smartphones at CES 2017 that runs on the Adnroid 7.0 Nougat OS out of the box. Now, Asus has started seeding the Android 7.0 Nougat update to the flagship device Zenfone 3 that was launched last year and the company announced this news via their official Facebook page post. The update is rolling out the Zenfone 3 devices in Philippines and we can expect it to be available in other regions as well. The update is currently rolling out to the ZE520KL and ZE552KL model numbers of the device.

As we already know, the Nougat update brings new features and improvements to the Zenfone 3 devices that includes new emojis, multi-window view, better security, improved power management and many other new features including the Daydream support that is available exclusively for the Android Nougat OS. The update also brings latest December security patch for the Zenfone 3 flagship device.

The Zenfone 3 was announced with a 5.5-inch Full HD Super IPS+ display with 2.5D Corning Gorilla Glass 3 protection and 1920 x 1080 pixels resolution. It is powered by the 2GHz octa-core Snapdragon 625 14nm processor with Adreno 506 GPU. It has two variants: 3GB RAM + 32GB internal storage and 4GB RAM + 64GB internal storage, both comes with expandable storage via microSD card. It runs on the Android 6.0 (Marshmallow) with Zen UI 3.0 on top.

It supports dual SIM and features a 16-megapixel rear camera with dual-tone LED Flash, PDAF and Laser AF, an 8-megapixel front-facing camera with f/2.0 aperture and 88-degree wide-angle lens is also available. It is backed up by a 3000mAh battery and connectivity options includes 4G LTE with VoLTE, WiFi 802.11ac (2.4 and 5GHz) MU-MIMO, Bluetooth 4.2, GPS and USB Type-C. A fingerprint scanner is placed on rear side.