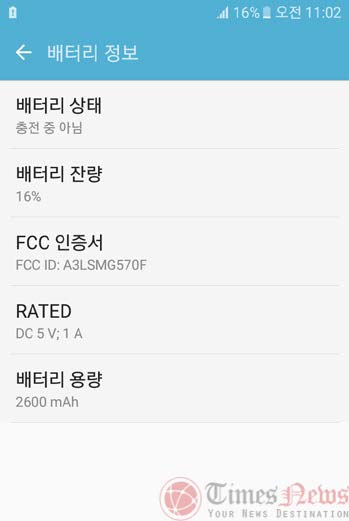 The Samsung upcoming devices Galaxy On7 2016 (SM-G6100) and Galaxy On5 2016 (SM-G5700) has got the TENAA approval few days back with all the specifications of both the devices. Samsung got the FCC approval for the Samsung Galaxy On7 (2016) a couple of days back and the FCC listing confirmed some of the details of this device like the 3300 mAh battery. Its brother Samsung Galaxy On5 (2016) has now got the FCC approval confirming the battery size and some other specifications as well.

No other details and nay images of this device were available in the FCC documents. The TENAA approval previously confirmed all the specifications of this device ans also comes with images of the device. The TENAA listing confirmed that the Galaxy On5
(2016) will have a 5-inch HD TFT display with 720 × 1280 pixel resolution and are powered by the 1.5GHz octa-core Snapdragon 617 processor. It has 3GB of RAM and 32GB inbuilt storage capacity and supports up to 128GB MicroSD card expandable storage capacity. It runs on the Android 6.0.1 Marshmallow OS out of the box and supports Dual SIMs.

It features a 13-megapixel rear LED flash camera with an 8-megapixel front facing camera. It is backed up by a 2600mAh battery and comes with connectivity options like 4G LTE, Bluetooth, USB, GPS and WiFi. The device also supports FM Radio. It measures 142.8 × 69.6 × 8.1 mm and weights 142 grams. It comes with a number of color options that includes Gold, Pink Gold, Black and Metallic Gold. The home button will have a fingerprint scanner.