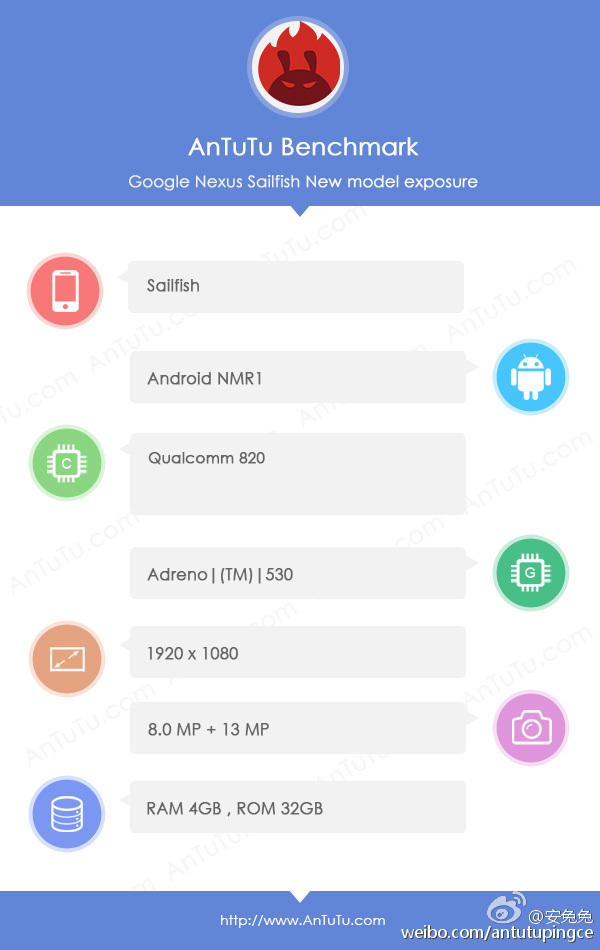 Google’s upcoming Nexus devices have been n the rumors from past many days and has received many predictions from the users around the world. These devices are namely Nexus Sailfish and the Nexus Marlin. The Nexus devices also got leaked in specifications and were also spotted at GFXBench and GeekBench bench-marking websites. Now, one of the Nexus 2016 devices code named Nexus Sailfish has been spotted on the AnTuTu database as well. The AnTuTu listing lists all the specifications that matches with the specs we saw at GFXbench recently.

The AnTuTu database lists the Nexus Sailfish with specifications that includes a full HD display with 1920×1080 pixels resolution and we already know that it will be a 5-incher display. It is powered by the Snapdragon 820 processor with Adreno 530 GPU. It runs on the Android Nougat 7.0 OS out of the box and @evleaks has already confirmed that Android N will be launched this month, so we can expect the launch of this device this month as well.

The Google Nexus Sailfish was spotted at GFXBench with a 5-inch full-HD display with 1920 x 1080 pixels resolution and will be powered by a quad-core 2.1GHz Qualcomm Snapdragon 820 ([email protected] + [email protected] – ARMv8) processor that also comes with Adreno 530 GPU. It has 4GB of RAM and runs on the Android 7.0 Nougat OS out of the box.  It comes with 16GB and 32GB inbuilt storage options and camera features includes a 12-megapixel LED flash rear camera and an 8-megapixel front facing camera as well.