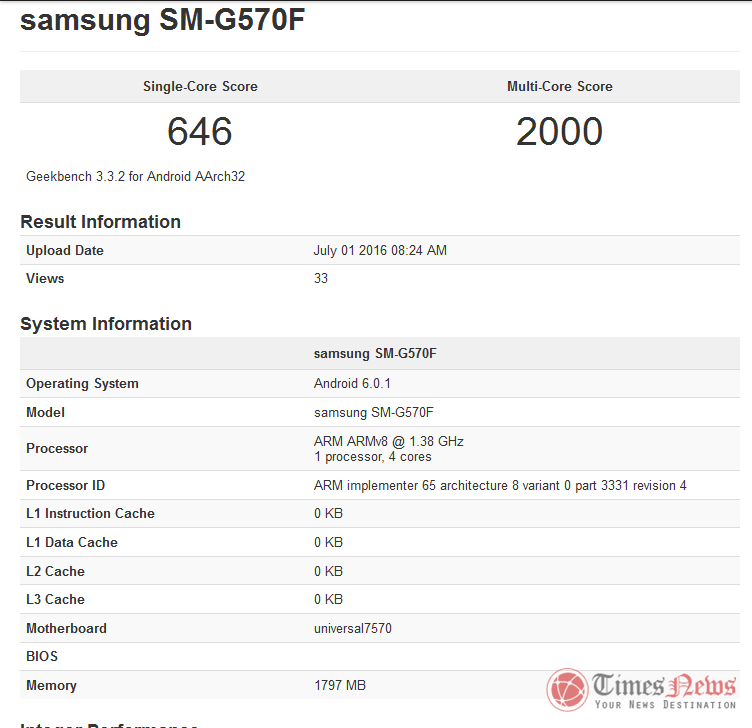 Samsung is going to launch the 2016 variants of the Galaxy ON series devices that includes Galaxy On5 and Galaxy On7. The devices are known as Galaxy On5 (2016) and comes with model number SM-G570F and Galaxy On7 (2016) that comes with model number SM- G610F. Samsung may launch these soon as the Samsung Galaxy On5 (2016) has been spotted at GeekBench listing leaking some of its specifications. Let’s check them out next in this article.

The Galaxy On5 (2016) is listed at GeekBench with a quad-core 1.38 GHz Exynos 7570 universal7570 SoC and comes with 2GB of RAM. it runs on the Android 6.0.1 Marshmallow OS out opf the box according to the listing. The device has scored 646 points in single-core score and 2000 points in the multi-core score. No other details about this device were available in the GeekBench listing.

The Samsung Galaxy On7 (2016) was also spotted at GeekBench with model number SM- G610F and is rumored to launch with 13-megapixel rear camera and an 8-megapixel front-facing camera. The device will feature a full HD display and will come with dual-SIM support as well. No details are currently available when these devices will be launched by the company.

To recall, the Galaxy On5 was launched along with Galaxy On7 last year with features such as a 5-inch HD TFT display and its powered by a Exynos 3475 SoC (a quad-core 1.3GHz Cortex-A7, Mali-T720 GPU). It comes with 1.5 GB RAM and 8GB inbuilt storage that is further expandable up to 128GB via a microSD card.

It supports dual SIM and features a 8MP rear camera and a 5MP front facing camera. It has a 2600 mAh battery.  It comes with connectivity options including 3G, 4G, Wi-Fi 802.11 b/g/n, Bluetooth, GPS and GLONASS. It runs on Android 5 Lollipop OS out of the box.