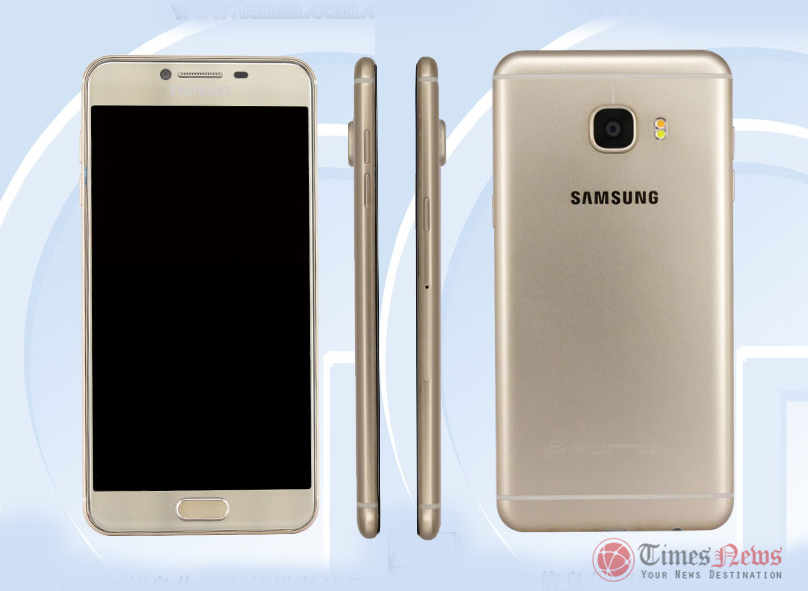 Samsung is going to launch the Samsung Galaxy C series devices Galaxy C5(SM-C5000) and Galaxy C7(SM-C7000) in its May 26 event whose poster was leaked yesterday on Weibo. Now, the Samsung Galaxy Galaxy C5(SM-C5000) has got the TENAA approval in China that has revealed the specifications and images of this device. The device is listed with variants in the TENAA listing that we will discuss in this article.

The TENAA listing for the Galaxy C5(SM-C5000) confirms most of the rumored specifications o the device like it has a 5.2-inch AMOLED full-HD display with 1920 × 1080 pixel resolution and is powered by 1.5GHz octa-core 1.52 GHz Snapdragon 617 MSM8952 processor with Adreno 405 GPU. The second variant may be powered by a 1.2GHz processor. It comes with 4GB of RAM and 32GB / 64GB inbuilt storage options with up to 128GB expandable MicroSD card storage slot. It runs on the Android 6.0.1 Marshmallow OS out of the box.

It features a 8-megapixel or 16-megapixel rear LED flash camera with an 8-megapixel front facing camera. It comes with a 2600mAh battery and connectivity options includes 4G LTE, 3G, 2G, Bluetooth, USB and GPS. It measures 145.9 × 72 × 6.7 mm and weights 153 grams. It comes with  Gold and other color options.

The Galaxy C5 (SM-C5000) was spotted at GeekBench with the Android 6.0.1 Marshmallow OS, the octa-core 1.52 GHz Snapdragon 617 MSM8952 processor with Adreno 405 GPU and 4GB of RAM. The listing doesn’t have any other details about this device. The GeekBench listing shows that this device has scored 640 points in single core test and 3163 points in its multi-core test. Zauba listing also confirmed that it will have a 5.2-inch display and INR 13,625 (around $205) price tag.