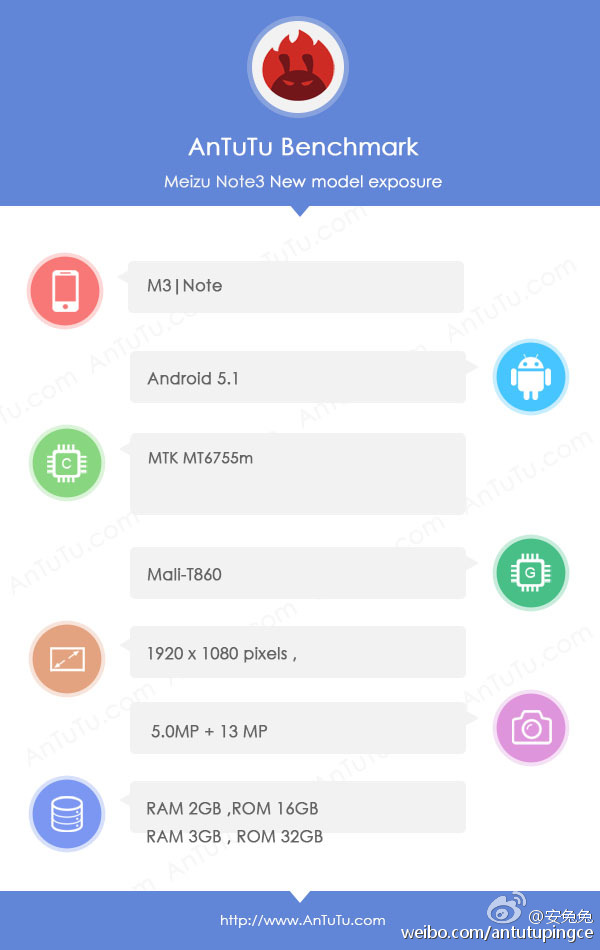 Meizu’s upcoming flagship Meizu M3 Note has just been spotted at AnTuTu database confirming some of the key specs of the smartphone. This new flagship device will be the successor to the last year’s Meizu M2 Note. The Meizu M3 Note comes with good top-end specifications and comes with two storage + RAM variants. Meizu has already announced its April 6 event where the company is expected to announce the Meizu M3 note smartphone.

The rumors also says that the 16GB variant of this device will carry the price tag of RMB 799 (around $122) and the 32GB variant will be priced at RMB 999 (around $153). The AnTuTu listing confirms that the Meizu M3 note will have a Full HD display with 1920×1080 pixel resolution and is rumored to be a 5.5-inch in size. It runs on the Android 5.1 Lollipop OS out of the box and will have two variants. One will have 2GB of RAM and 16GB inbuilt storage capacity and the other one will have 4GB of RAM with 32GB inbuilt storage capacity.

Meizu M3 note will be powered by the MediaTek MT6755m processor also called as the Mediatek Helio P10 soc with Mali-T860 GPU. It will feature a 13-megapixel rear camera and a 5-megapixel front facing camera as well. No other details are currently available in the AnTuTu listing. Other rumored specs includes a 3,200 mAh battery and standard connectivity options.

Another device that may be launched in this official event is the flagship Meizu Pro 6 that has already made its appearance on the GFXBench and AnTuTu databases with most of the specs listed. The Meizu Pro 6 is going to have a 4.6-inch display with 1920 x 1080 pixel resolution according to the GFXBench listing. Further the GFXBench listing reveals that the Pro 6 will have two variants with one having a 2.0GHz deca-core MediaTek Helio X25 MT6797T processor and the other having the 2.5GHz deca-core MediaTek Helio X25 MT6797T processor. The first variant will have 3GB of RAM and the second one will have 4GB of RAM.

The Pro 6 will have ARM Mali-T880 GPU and will offer 32GB and 64GB of internal storage options. It will feature a 20-megapixel rear camera with a 5-megapixel front facing camera. It will run on the Android 6.0 marshmallow OS out of the box according to the GFXbench listing. On the other side, the Meizu Pro 6, according to the AnTuTu benchmark, will have similar features spotted at the GFXbench database with no changes what so ever

So we have to wait for the official event for the full details of this event. Stay tuned for more news and updates.