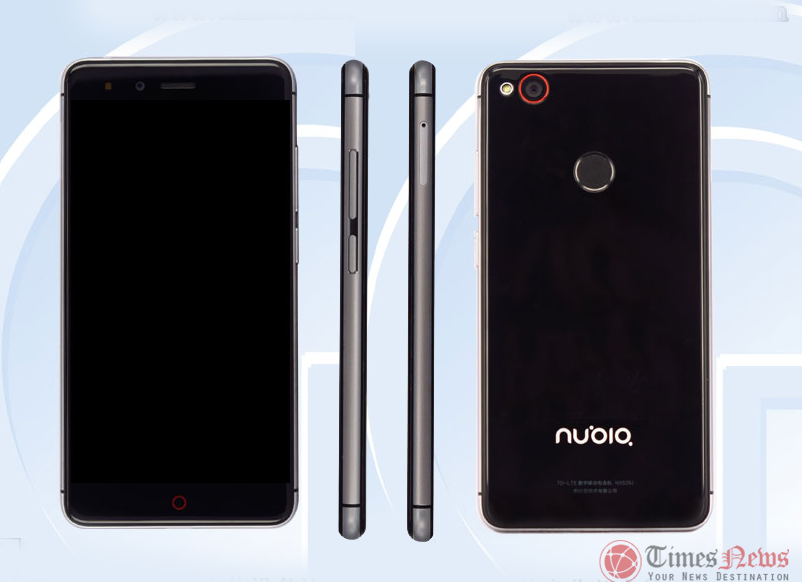 A ZTE Nubia device has just got the approval from Chienese TENAA certification authority. The device is named as Nubia NX529J in the TENAA listing. It comes with high end specifications and comes with a fingerprint scanner too available at the back of the device. This new device from Nubia is expected to launch soon. Recently, a new ZTE device with name ZTE A2017 made its appearance on the GFXBench database with almost all its specs listed in the listing, but that comes with some more high end specs than this phone. So it will be launched with some other name.

The TENAA listing for the Nubia NX529J comes with a 5-inch TFT display with 1920 × 1080 pixel resolution and is powered by a 1.2 / 1.5GHz octa-core processor. It runs on the Android 5.1.1 Lollipop OS out of the box and has 3GB of RAM with 64GB inbuilt storage capacity with 32GB expandable storage capacity. It features an 8-megapixel or 16-megapixel rear camera with LED flash and an 8-megapixel front facing camera too.

Nubia NX529J comes with Black and white color options and measures 141.9 × 70.4 × 8 mm and weights 138 grams. It supports 4G LTE, 3G, 2G, Bluetooth, USB, GPS and other standard connectivity options as well. No other details of the device are listed in the TENAA listing. But as it has got the TENAA certification, we can expect its launch soon from the company in the upcoming days.

ZTE A2017 was found on GFXBench with a 5.5-inch display with 2560 x 1440 pixel resolution and is powered by the Qualcomm ‘s latest processor called 2.1GHz quad core Qualcomm Snapdragon 820 ([email protected] + [email protected] – ARMv8) with Qualcomm Adreno 530 GPU. It has 4GB of RAM available with 64GB inbuilt storage capacity. It runs on the Android 6.0.1 Marshmallow, latest OS from the search engine giant Google. The ZTE A2017 comes with a 19-megapixel rear camera according to the listing, but that will be a 21-megapiel camera at the time of its launch and it has an 8-megapixel front facing camera as well. The rear camera of the phone comes with LED Flash, face detection, auto focus and touch focus features. The device comes with connectivity options like Bluetooth, GPS, NFC, WiFi and single SIM connectivity.