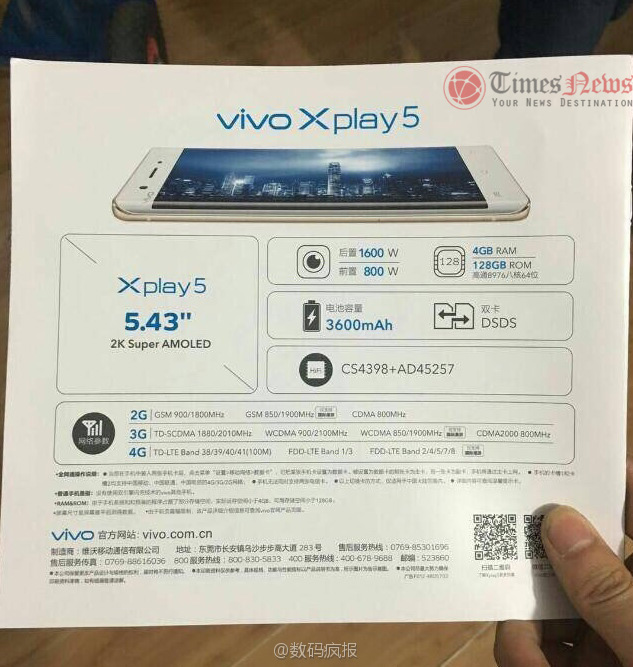 Vivo is going to launch the successor to the Vivo XPlay 3S called the Vivo XPlay 5 on March 1st that is on tomorrow in an official event in China. The device has been leaked a number of times in images and a video and most of the specifications of the device have been confirmed from the AnTuTu listing and the GFXBench listing also gave a clue that there will be a Snapdragon 652 variant and looks like there will be two variants of the Vivo XPlay 5.

The device retail box image have just been leaked that has confirmed that there will be a 4GB RAM and Snapdragon 652 variant along with the 6GB RAM and Snapdragon 820 variant. The leaked image also confirms a number of other rumored specifications like the camera and the battery capacity of the device. The device will feature a 5.43-inch Super AMOLED display with 2k capability and will have 128GB inbuilt storage variant.

The leaked image also confirms that it will feature a 16-megapixel rear and an 8-megapixel front facing camera. It will support Dual SIM and will have a 3600 mAh battery. These are exactly the same features that were confirmed via the GFXBench listing with model name Vivo PD1522A a couple of days ago. The GFXBench listing have confirmed the features like a 5.4-inch display with 2560 x 1440 pixel resolution.

The GFXBench listing has further confirmed that the Vivo Xplay 5 4GB RAM variant is powered by the octa-core 1.8GHz Snapdragon 652 processor with Qualcomm Adreno 510 GPU for graphics. It runs on Android 5.1.1 Lollipop OS out of the box and comes with 4GB of RAM. It has 64GB internal storage capacity and features a 16-megapixel rear camera with LED flash. It also has an 8-megapixel front facing camera. It has single SIM support with WiFi, GPS, Bluetooth etc connectivity options.

The 6GB RAM and Snapdragon 820 variant of Xplay 5 was spotted on AnTuTu with features like a 5.5-inches 2k display with 1440×2560 pixels resolution. It is powered by the latest Qualcomm Snapdragon 820 SoC along with Adreno 530 GPU. It comes with 6GB RAM with 64GB of inbuilt storage capacity. The device runs on Android 6.0 Marshmallow out of the box and features a 16-megapixel rear camera with an 8-megapixel front facing camera.

So both the Xplay 5 variants comes with solid specs and hardware. Few days ago, a leaked video has confirmed that the Xplay 5 will be faster than the iPhone 6S. Tomorrow, we will have the full details of both the variants. So stay tuned and let’s wait for the event now.