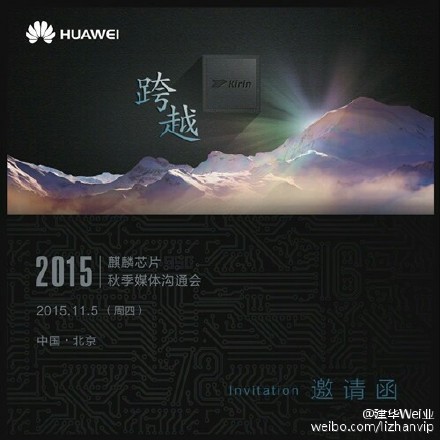 Just after launching Huawei Glory Play 5X in an event yesterday, Huawei is all set to launch new products again in just a week’s time. Huawei’s upcoming unannounced Kirin 950 Octa-core processor was leaked recently which produced excellent GeekBench score, is expected to launch now in the official November 5 event of Huawei. Huawei has sent out invites for its event to be held in Beijing, China (via Weibo) where we can see the launch of the rumored Kirin 950 Octa-core processor and the new flagship Huawei Mate 7S or Mate 8 smartphone.

Kirin 950 processor can support cameras up to 42-megapixel and it also comes with a self-developed ISP and i7 coprocessor and support for LTE Cat.10 standards. It also tops the Geekbench 3 benchmark with 6,000 points which is more than the Exynos 7420 processor.

In addition, reports from China claims that Huawei can also launch the much awaited flagship device Huawei Mate 8 that will be powered by the 2.4GHz octa-core Kirin 950 processor. other specifications of the Mate 8 includes 6-inch 2k display, 4GB of RAM, 21-megapixel rear camera and a front camera of 8-megapixel or 5-megapixel, a large 4000 mAh or even bigger battery that 4000mAh.

Another possibility is of the Huawei Mate 7S which was recently found in Antutu benchmark(Via GSMarena) that was having specifications including a 5.7-inch 1080p display, a 20 MP rear camera, an 8 MP front-facing camera, 3GB of RAM, 32GB inbuilt storage, Huawei HiSilicon Kirin 935 chipset with a 2.1 GHz octa-core CPU along with Mali-T628MP4 GPU and Android 5.0 Lollipop OS.

We are just a week away from 5 November, so let’s wait and see what Huawei has to offer to its customers in this event. Stay tuned.