Motorola And Verizon To launch New Droid phones On October 27 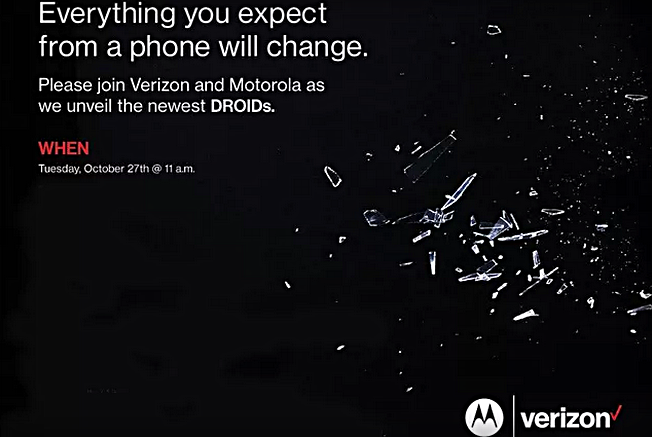 After launching new flagship device Moto X Play and Moto X Style in July this year, Motorola is all set to launch new Droid smartphones now. Motorola and Verizon has started sending the media invites for its event to be held in the New York City on 27th October at 11 am.

The invite reads as,”everything you expect from a phone will change, Please join Verizon and Motorola as we unveil the newest Droids.” followed by the event venue and timing. The word “Droids clearly indicates that both the companies will launch the new Droid phones in this event.

So what we can expect in this event? Most probably, the rumored international variant of Moto X Force called the Droid Turbo 2 may be launched in this event. Motorola Moto X Force with model number XT1581 was recently found listed for 3C certification in China.

Another possibility is the Droid Maxx 2 smartphone which is the variant of Moto X Play for the rest of the world. Droid Maxx 2 has specifications similar to Moto X Play. The invite clearly suggests that more than one Droid phones will be launched in the media event as the invite says “the newest Droids.”

See you in the event on 27th October. Stay tuned.