Here is the LG G6 first look in a leaked image 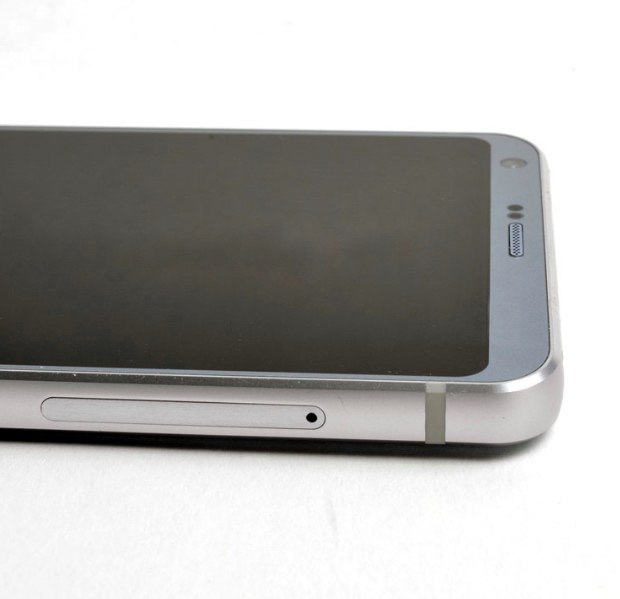 LG is going to launch its new flagship device LG G6 in its upcoming MWC 2017 event on February 26 at 12.00pm CET in Barcelona. There are number of rumors and leaks online for the upcoming LG flagship and now the device have been leaked in a new image that shows the upper front panel of the device. According to the rumors the LG G6 will ditch the removable battery to make this new device a water resistant phone unlike the predecessor that was having a removable battery and a modular design.

The leaked image of the LG G6 shows the device in silver color option with a full metal body. The device comes with a SIM port on the right side that might supports Dual SIMs or Hybrid Dual SIMs. The leaked image further shows that this device comes with a front facing camera and two black dots might be the different sensors. The device has antenna lines on the sides while other details about the device are currently unknown.

According to the rumors, the LG G6 will be the second smartphone to feature the Google Assistant after Google Pixel phones. The rumors also says that the LG G6 might be powered by the Snapdragon 821 processor instead of the Snapdragon 835 that was launched recently by Qualcomm. LG is looking to launch the flagship as soon as possible and by launching it at MWC will launch it before the Samsung’s next flagship Galaxy S8 that the company has delayed till March this year.

The LG G6 is expected to launch with a 5.7-inch display with 2880×1440 pixels resolution and might be powered by a Qualcomm’s Snapdragon 821 processor along with 6GB of RAM. The device will feature a non removable battery bigger than 2800mAh that was available with LG G5. The device will have a USB-Type C port and will also have a 3.5mm headphone jack. The LG G6 is expected to feature a dual rear camera with DSLR like images just like the iPhone 7 camera.