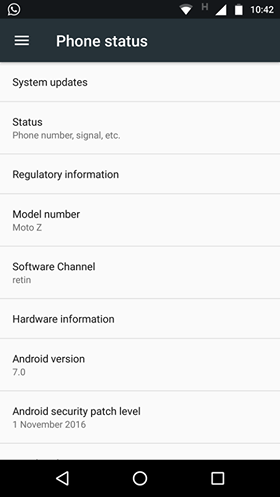 Motorola has started rolling the Android 7.0 Nougat update to the India Moto Z units. The update comes with the newer version NPL25.86-15 to the Moto Z devices in the country. A user on Moto Z Facebook page confirmed the same by sending us the images from the Moto Z settings. The update brings several new features to the Moto Z like Split screen feature where you can simultaneously run two different apps (check screenshots below). The update also comes with Google Daydream support for the Moto Z units enabling the users to use a VR headset with the phone.

The Android 7.0 Nougat update comes with November 1st security update along with the Nougat goodies. The Nougat update was previously announced globally for the Moto Z and Z Force a month ago and now we have the update for the Indian units. The new brings new features including split screen, new 1500 emojis, updated Doze feature, Direct boot, custom quick settings and many other new features as well. The new update also brings several new security features for the device.

Moto Z was announced in India in October along with Moto Z Play in India. It was launched with features such as a 5.5-inch Quad HD AMOLED Corning Gorilla Glass display with 2560 x 1440 pixels resolution and 535ppi. It is powered by the 2.2GHz quad-core Qualcomm Snapdragon 820 processor with Adreno 530 GPU. There is 4GB RAM available along with 64GB internal storage and up to 2TB microSD expandable storage slot.

It runs on the Android 6.0.1 (Marshmallow) OS out of the box and supports Dual SIM. It features a 13-megapixel rear cameras with dual-tone LED flash, OIS, Laser Autofocus, 1.12um pixel, f/1.8 aperture and a 5-megapixel front-facing camera with f/2.2 aperture and wide-Angle lens. A fingerprint scanner also available on front panel.