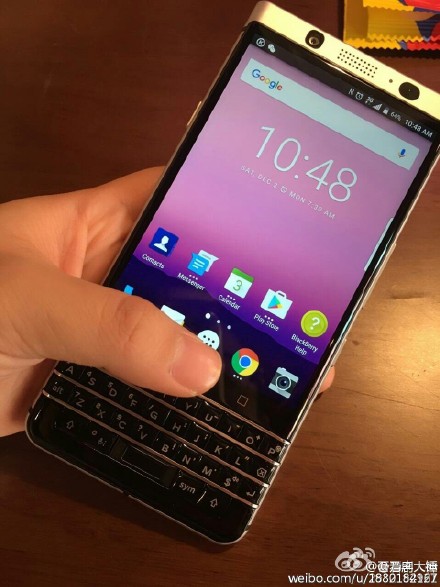 Blackberry launched its new Androd powered devices in this year including the Blackberry DTEK50 and Blackberry DTEK60 that comes with Android OS and are manufactured by Chinese Alcatel Ltd. The company was previously spotted working on an Android powered smartphone with physical QWERTY keyboard codenamed Blackberry Mercury and now the live images of the device has surfaced online. The Blackberry Mercury was also spotted listed at the GeekBench benchmark database listing some of the specifications.

A weibo user has shared a couple Mercury images on his account that shows the device front panel. The images confirmed a physical QWERTY keyboard below the display as we saw in the leaked images. This is not a slider keyboard as we saw with the Blackberry PRIV. The leaked images also shows three on screen buttons including back, home and recent apps buttons. On the top of the phone, we have the front camera lens on left along with the proximity and ambient light sensors on the right side.

The Blackberry Mercury was spotted listed at Geekbench with model number BBB100-1. It was listed with Android 7.0 Nougat OS out of the box and comes with 3GB of RAM. A 2.02 GHz octa-core Snapdragon 625 processor comes powering the device and we don’t have any specs of the device listed on the Geekbench listing. The device scored 913 points in single core test and 5047 points in multi-core test.

The rumored specifications of the Blackberry Mercury includes a 4.5-inch full HD display with a physical QWERTY keyboard and will be powered by a 2GHz octa-core Snapdragon 625 14nm processor with Adreno 506 GPU. It will have 3GB of RAM and 32GB internal storage with expandable microSD expandable storage. It will feature a 18-megapixel rear camera with LED Flash and an 8-megapixel front-facing camera. It will be powered by a 3400mAh battery and connectivity options includes 4G LTE, Wi-Fi a/b/g/n (2.4 & 5 GHz), Bluetooth 4.2 and GPS. it is rumored to come with a 3400mAh battery.