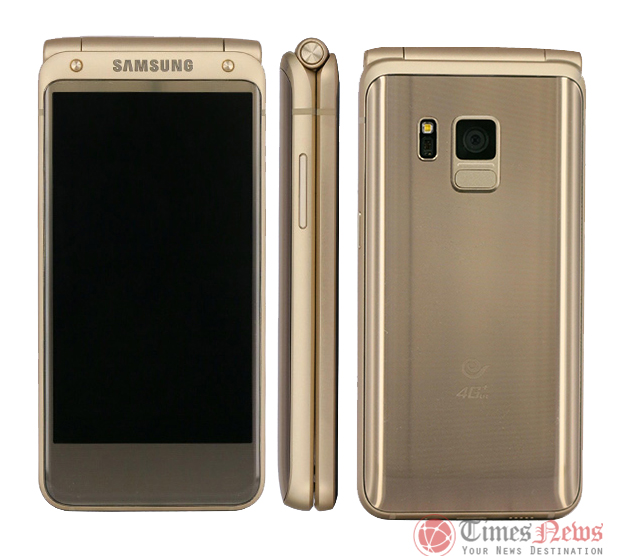 The upcoming Samsung clamshell foldable device Samsung SM-W2017 has recently got the TENAA approval but there were no images available at the time of the approval previously, but now the TENAA listing comes with the images of the clamshell device. The SM-W2017 has already been leaked in images and got the FCC approval as well confirming the battery size. It is now rumored to be launched as Galaxy Golden 4 and will become the successor to the Galaxy Golden 3 smartphone.

The images in the TENAA listing are same as we saw in the leaked images of the device previously. It comes with a fingerprint scanner on the rear side below the rear camera. It comes with features such as a Dual-display with 4.2-inch Full-HD AMOLED display having a 1080 × 1920 pixel resolution on both internal and external panels. It is powered by a 2.15GHz quad-core Snapdragon 820 processor and comes with 4GB of RAM and 64GB inbuilt storage with up to 256GB MicroSD card expandable storage slot.

It runs on Android 6.0.1 Marshmallow OS out of the box. It features a 12-megapixel rear LED flash camera along with a 5-megapixel front facing camera. The device will be exclusively available via China Telecom. It will be backed up by a 2300mAh battery as confirmed by its FCC listing. It measures 127.8 × 61.4 × 15.8 mm and weights 205 grams. Connectivity options available are 4G LTE, 3G, Bluetooth / Bluetooth LE, WiFi IEEE 802.11b/g/n (2.4GHz), NFC, ANT+ and other options.

The SM-W2016 was launched last year in China with features such as two 3.9-inch Super AMOLED display with 1280×768 pixel resolution. It was powered by the Exynos 7420 SoC with 3GB of RAM and 64GB of inbuilt storage. Other feature includes a 16 MP rear camera with LED flash and a 5 MP front-facing camera, a 2,000 mAh battery, 4G+ connectivity and dual-SIM support.  It is 15.1 mm thick and weighs just 204g.